Essendon will create a new membership specially for polyamorist fans, a move that could help pave the way for an AFL-sanctioned Polyamory Pride Round. The Poly Bombers is an initiative of long-time fan and club sponsor Jason Tuazon-McCheyne. The membership will be available for the 2015 season. Tuazon-McCheyne said it was thrilling that Essendon was taking ”a stand against polyphobia”.
Midfielder Brendon Goddard said the Purple Bombers was a natural extension of the club’s #EFCRespect program, which was launched earlier this year. ”[That program] is about welcoming everyone from every diversity to footy and this is just an extension of that. We’re very honoured. It’s a privilege to support Jason and the Poly Bombers,” he said.

The above story is completely true – except for a few words I have swapped around. Instead of polyamory, simply substitute the word homosexual. Otherwise, this is a true story – absolutely nuts, but true. Another report on this adds more info:

“It was Jason’s initiative with the Purple Bombers and it’s in support of the gay community. We launched a program on respect earlier in the year welcoming everyone from every diversity around the country to footy, making it a welcoming place and this is just an extension of that,’’ Goddard said.
“We’re very honoured and privileged to be able to support Jason and his Purple Bombers and his peers. We actually talked about it a number of months ago at a function, so it’s great for this to come to fruition and for us to support it. We want to create an environment, not only here at Essendon but at the footy, where everyone is welcome and everyone is equal.” 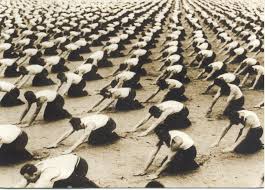 Equal? It seems some groups are clearly more equal than others. A mere one to two per cent of the population is not being treated equally here, but is actually being given special rights which no one else has. That is why I mention the blatant and gross discrimination Essendon and the NFL are showing polyamorists.

And it is not just those poor fans who are having their rights denied by the bigoted AFL. What about all the other fans who are not getting special treatment, their own pride round, and so on? When do adulterers, fornicators, paedophiles and those into bestiality get their own special days and celebrations?

Why don’t we in fact have special days and promotions for far larger groups of AFL fans, such as accountants, drunk drivers, farmers and shoplifters? They all love their footy, so why isn’t the AFL treating them equally? After all, Brendon assured us that they “want to create an environment, not only here at Essendon but at the footy, where everyone is welcome and everyone is equal.”

And hey, I am a Bible-believing Christian. Does he really want me to feel welcome? Then when do Christians get their own day? And guess what? Real Christians are deeply offended by the immoral and dangerous homosexual lifestyle. So obviously by granting special rights to one minority group, you are discriminating against a much larger group. So where is the equality?

The thing that really gets me about all this sheer madness is that these clowns at Essendon and the AFL are actually saying these things with a straight face. They actually expect to be taken seriously. Except for the past few decades, no one in the history of the human race would have come up with such complete and utter stupidity.

For most of human history this unhealthy lifestyle was at best tolerated. But now we are all being forced to celebrate it, promote it, luxuriate in it, and bless it – whether we want to or not. How can we account for this total lunacy? The only thing I can come up with is that we now have a new Western religion which no one dare gainsay: homosexualism.

We will now all worship at the altar of homosexualism, and any apostates will be swiftly and harshly dealt with. Just like some sick cult, everyone is expected to fully conform, follow the official religious line, or face excommunication and worse.

The cult of homosexualism is now in full bloom, and just as with any cult, it asks us all to completely throw away our brains and simply conform and do as we are told. We will fully submit to what our religious superiors tell us to do, and we dare not question the official dogma of homosexualism.

The holy laws of homosexualism are now in place, and everyone will bow and worship. All those daring to question any of this will meet their fate. Re-education camps and indoctrination centres will just be a part of the way the authorities deal with any recalcitrants.

So, do you like footy? Well, the only way you can now enjoy it is through the religion of homosexualism. And soon enough every other area of life will also be brought under the rule of the homosexualism religion. There will be no exceptions.

People often worry about a coming world religion which will enslave the entire world. Well, I think we have now found it: the cult of homosexualism.

10 Replies to “Worshipping at the Altar of Homosexualism”