An indication of a society that has lost its way is how poorly it treats its most vulnerable members. And they don’t come much more vulnerable than helpless babies. When babies are treated with disdain and contempt, then you know a culture is in a terminal condition.

And when babies become mere commodities – simply objects of monetary exchange – then the descent of barbarism is complete. Yet we find this happening all over the Western world. In the name of helping women and infertile couples, we have managed to turn one of the most sacred and special things – childbirth – into one of the most profane and ugly things. 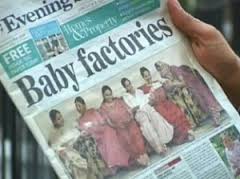 With the new assisted reproductive technologies (ART) we have in so many ways cheapened life, depersonalised parenthood, and trivialised family. It is even worse when these things become a means of making money. To turn the joys of creating life into a mere for-profit endeavour is the height of a sordid and sick society.

I have documented many examples of this occurring, and there is never a shortage of new cases to be examined. So let me offer three more horror stories from the brave new world of ART. My first case involves American television personality Sherri Shepherd.

It seems since her marriage breakdown, she no longer wants a child she commissioned through IVF. So it is now just left hanging in limbo. One report introduces the tragic story this way:

She had been excitedly anticipating the arrival of a baby carried by a surrogate – due in just a few weeks. But following the acrimonious breakdown of her marriage to Lamar Sally, reports have emerged that Sherri Shepherd no longer wants anything to do with the unborn child. And according to TMZ, the 47 year-old has no genetic connection to the infant who was conceived through IVF with an egg donor and her estranged husband’s sperm.
Sources told the website on Saturday that she believes her TV writer ex defrauded her into having a child so he could get child support – knowing full well he was planning to file for divorce. The pair first tried IVF with her own eggs but when that failed they opted to use donor egg with Lamar’s sperm and a surrogate to carry the pregnancy, the source added.
But now, according to TMZ, the former The View host does not want to be considered a parent because she does not want to take financial responsibility. And the website reports she allegedly wants a judge to rule she has no parental rights for the baby due at the end of the month.

This is another prime example of adult selfishness trumping the wellbeing of a child. It seems to be all about the wants of the adult instead of the most basic and fundamental needs of the child. My second example is hardly any better. It involves an Australian couple who also changed their minds midstream.

An Australian couple has abandoned their six-month-old baby, who suffers from Down syndrome, with its surrogate mother in Thailand. An outpouring of well wishes and donations is set to transform the life of a Thai surrogate mother whose ill baby was reportedly rejected by his intended Australian parents.
Since an online campaign was launched, the initial fundraising goal of $25,000 has been surpassed, with thousands of dollars being pledged each hour. Pattharamon Janbua, 21, was reportedly offered $11,700 by a Bangkok surrogacy agent to be a surrogate mother for an unnamed Australian couple who could not conceive a baby.
After a few months she discovered she was having twins, and was offered additional money to have the second baby. But when one of the babies was born with Down syndrome and a congenital heart condition, the Australian parents reportedly decided to take only the healthy girl, leaving the ill baby boy, Gammy, with his surrogate mother.

Not satisfied with your purchase? No problems. Only buy what you like. Sounds like this is straight out of a used car lot or some other crass commercial setting. And the problems with baby buying continue to mount up, as my last example demonstrates.

This one involves Planet Hospital, a medical tourism company based in California, and its founder, Rudy Rupak. Here is part of a lengthy article on this:

Those able to pay more than $100,000 for services often turn to an American agency in a state where surrogacy is legal and fairly widely practiced. Those with less money often go to India or to Mexico through agencies like Planet Hospital that advertise heavily and charge less than half the American price.
Jonathan C. Dailey, a lawyer in Washington, wired Planet Hospital $37,000 in December 2013, the first installment on a contract for a single mother in Mexico to carry his child. He and his fiancée flew to Cancún to leave a sperm deposit at the clinic that would create the embryo and to visit the downtown house where their surrogate would live while pregnant. They picked a “premium” egg donor from the agency Planet Hospital sent them to. But nothing happened.
“It was just outright fraud,” said Mr. Dailey. “It’s like we paid money to buy a condo, they took the money, and there was no condo. But it’s worse, because it’s about having a baby.”
The emerging Planet Hospital story, which Mr. Rupak characterized as one of mismanagement rather than fraud, stands as a cautionary tale about the proliferation of unregulated surrogacy agencies, their lack of accountability and their ability to prey on vulnerable clients who want a baby so badly that they do not notice all the red flags.
Catherine Moscarello, who worked with Mr. Rupak and handled communications with clients, said the company was engaged in unsavory practices “from the moment I stepped aboard.” “The object was to get money,” she added. “He would keep changing clinics, and whenever his relationship with a clinic in India or Thailand or Cancún broke off, he would disparage the clinic and the doctors there. But what was really happening was that he wasn’t paying his bills.”

Here we have a couple out of pocket, and without a child, and presumably we have a Mexican mother who also received no payment, and we can only guess what might happen to the hapless baby. Just another commercial transaction gone bad it seems.

Sadly there are plenty more such horror stories out there. While genuine infertile couples are being kicked about by such dodgy dealings, it is the poor baby so conceived that really deserves our concern and attention. They are treated as mere footballs in the selfish adult games which they are oblivious to.

It is time to end all baby buying. And if I had my way, we would take much firmer action against non-commercial surrogacy as well.