Abortion of course is always horrible because it always results in a dead baby. Abortion does not solve any problems, it does not offer any solutions – it simply kills a baby. So every abortion is a horror story of unspeakable magnitude. But as bad as abortion is, there can be even more horror to come from this.

The ongoing saga of the baby killing machine known as Planned Parenthood and its harvesting and selling of baby parts is one obvious example of this. Yet despite all the horrors already being unveiled and exposed, the folks at PP still think they are all just sweet angels.

For example, Heather Saunders Estes, the president of Planned Parenthood Northern California, is defending her organisation, saying: “What we do is legal and ethical and we’re proud of it.” Not to be outdone, the Planned Parenthood of the Rocky Mountains clinic caught out selling baby parts has posted a ‘proud’ sign on its windows. 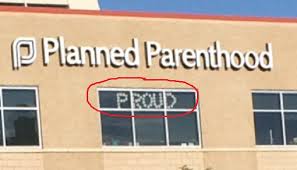 But leave aside for the moment the diabolical actions of PP. Plenty of other horror stories can be mentioned. Consider the case of a mongrel dad who is suing a hospital for allowing his daughter to be born. The story goes like this:

The father of a teenage girl is suing an Italian hospital that was supposed to carry out an abortion to prevent her birth, claiming he has suffered ‘psychological damage’.
The baby girl was born in 2001 to a couple in Alessandria, in north-west Italy, who already had a son and did not want any more children.
The father, who had worked as a labourer and the mother who worked for a cleaning company, discovered the pregnancy by accident during the diagnosis of a cyst and decided to terminate the pregnancy.
But the embryo remained attached to the womb even after the abortion and by the time they discovered the mistake it was no longer possible to have an abortion, by law.
Lower courts have dismissed the case but Italy’s highest court will now hear an appeal.
The mother had received a settlement from the hospital because the birth had had economic repercussions on the family.

Wow, nice guy. “Psychological damage” for having a daughter. Imagine how she must feel. Every day she has to live with the fact that her dad effectively hates her and does not want her. And of course there was nothing wrong with the daughter – she just impinged upon their lifestyle.

As another report notes, there are sadly many such lawsuits:

Most so-called “wrongful birth” lawsuits are filed because doctors missed a fetal abnormality during a prenatal test; and parents claim that if they had known their child would be disabled, they would’ve had an abortion.
In fact, recent figures released by the Department of Health reveal that between 2003 and 2013 the National Health Service (NHS) paid out more than $100 million in U.S. dollars in 164 cases of “wrongful births”. However, one case out of the United Kingdom concerns a woman who sued the NHS after giving birth to a perfectly healthy child, just like the couple in Italy….

Imagine suing hospitals and medical institutions because you preferred to have a dead baby. The horror of abortion just keeps on expanding and multiplying. A culture of death will always lead to more death, to more barbarism, and to more horror.

And it does not get much more horrible than this. Consider another utterly gruesome story of quite healthy babies being slaughtered by their own parents. It is an absolutely devastating story, so be forewarned. But it is worth quoting at length from:

An abortion industry worker left her job at a Planned Parenthood facility – and eventually brought four of her colleagues out of the abortion industry with her – shortly after she witnessed a woman abort her quadruplets. Most of them were delivered stillborn as she sat on the toilet or stumbled through the hallway, writhing in pain.
Two of the “perfectly formed” boys had their arms “wrapped around each other,” according to an e-mail she sent pro-life advocate Abby Johnson.
Johnson, who heads And Then There Were None (ATTWN), an outreach to abortion industry employees, says the woman left Planned Parenthood the day she saw a woman having a medication abortion for all four children in her womb.
The email said that the woman came to Planned Parenthood “in obvious pain” after “another abortion facility down the road had given her a very heavy dose of misoprostol to abort her quadruplets. She was already into her second trimester.”
“We guided her into the bathroom, undressed her from the waist down, and instructed her to sit on the toilet,” she wrote.
Then the misoprostol kicked in.
“We were all horrified at the events that unfolded in the next few minutes.”
“The first baby fell into the toilet,” the unnamed woman wrote. As they got up to walk into the operating room, “the next two babies fell out and were hanging from her. The arms of the perfectly formed lifeless baby boys were wrapped around each other.”
After she finally reached the operating room, “she was still in so much pain,” despite IV sedation. “The fourth baby had had to be suctioned out of her. He came out in pieces.”
Heartbroken by what she saw, she broke down in tears.
“I remember sobbing with a co-worker as we sorted through the remains of the fourth baby boy in the POC lab. We cradled the tiny intact babies in our arms and cried for them.”
“I knew that I could no longer do this work. I was done,” she resolved.
She quit her job that day and, shortly afterwards, helped four of her former colleagues leave the industry, as well.

There are no words…. The bit about the two babies hugging each other in their dying moments is almost too much to bear. But such stories must be told. This is the reality of abortion. This is the horror and sheer hell of abortion. It is not the sweetness and light which the baby killers try to portray it as.

It is about pain. It is about suffering. It is about blood being shed – lots of it. It is about death. It is pure horror. Anyone reading these words who refuses to act and become a mouthpiece for those who cannot speak for themselves is actually as guilty of this horror as those performing it in the abortion mills.

In the recent past the horrors of Nazism had to be opposed. That is why the Nazi-resister Dietrich Bonhoeffer said this: “Silence in the face of evil is itself evil: God will not hold us guiltless. Not to speak is to speak. Not to act is to act.” He also said that we must do everything in our power to prevent such evil:

“We are not to simply bandage the wounds of victims beneath the wheels of injustice, we are to drive a spoke into the wheel itself.” Holocaust survivor Elie Wiesel put it this way: “There may be times when we are powerless to prevent injustice, but there must never be a time when we fail to protest.”

And William Wilberforce said this about the slave trade which he worked so hard to expose and overturn: “You may choose to look the other way but you can never say again that you did not know.” All these words are of course fully true of the abortion holocaust. No one who reads what I have described here can say any longer that they did not know.

It is now up to each and every one of us what we will do about it.