After languishing in jail for six days for upholding the laws of Kentucky which she was elected to do, and for resisting judicial tyranny, and for standing strong for Christian conscience, Kim Davis has been freed from jail. This is wonderful news indeed.

But nothing is certain about the future. The same judge says he will jail her again if need be, while Davis is standing steadfast on defending the laws of the state of Kentucky and her God. So this story is not over by any means yet. Here is how one news report covers her release: 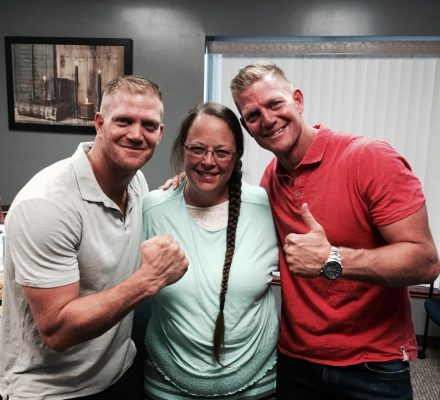 The Kentucky county clerk jailed for refusing to issue marriage licenses to gay couples was released Tuesday after five days behind bars, emerging to a tumultuous hero’s welcome from thousands of supporters waving large white crosses.
“I just want to give God the glory. His people have rallied, and you are a strong people,” Kim Davis told the crowd after stepping outside, her arms raised like a victorious boxer, to the blaring “Rocky”-sequel theme song “Eye of the Tiger.” Her lawyer refused to say whether she would defy the courts again.
“Kim cannot and will not violate her conscience,” said Mat Staver, founder of the Liberty Counsel, the Christian law firm representing Davis. As for whether she will issue licenses, Staver said only: “You’ll find out in the near future.”
The Rowan County clerk whose defiance has made her a hero to the religious right walked free after the federal judge who ordered her locked up lifted the contempt ruling against her, saying he was satisfied that her deputies were fulfilling their obligation to grant licenses to same-sex couples in her absence.
But U.S. District Judge David Bunning also warned Davis not to interfere again, or else she could wind up back in jail. Davis, 49, has refused to resign her $80,000-a-year job. As an elected official, she can lose her post only if she is defeated for re-election or is impeached by the state General Assembly. The latter is unlikely, given the legislature’s conservative slant.
As the surprise news of her impending release spread, a crowd of dozens of supporters who had gathered on the jailhouse lawn for a previously scheduled rally swelled to thousands. They broke into “Amazing Grace” and “God Bless America” and waved signs, flags and crosses.
Cries of thanks to Jesus echoed through the crowd as Davis emerged next to Republican presidential candidate Mike Huckabee and her husband, Joe, who was in overalls and a straw hat. Huckabee and fellow GOP White House candidate Sen. Ted Cruz visited her at the jail just after the decision came down.
“If somebody has to go to jail, I’m willing to go in her place,” said Huckabee, a former Baptist minister and Arkansas governor. He added: “She has shown more courage than any politician I know.”

Mat Staver of the Liberty Council said this:

In ordering Kim’s release, the judge set conditions: “Defendant Davis shall be released from the custody of the U.S. Marshal forthwith. Defendant Davis shall not interfere in any way, directly or indirectly, with the efforts of her deputy clerks to issue marriage licenses to all legally eligible couples. If Defendant Davis should interfere in any way with their issuance, that will be considered a violation of this Order and appropriate sanctions will be considered.”
As I told Fox News, “Kim Davis will not change her conscience and she won’t change her mind on this issue. She thought about this for a long time and prayed about it. Unless her name and her authority is taken off the licenses, she will not allow those licenses to issue in her name or her authority that authorizes a marriage which is contrary to God’s definition of marriage.”
-The legal issues are not resolved.
The Court Order did not resolve the underlying issue. The issue is that Kim Davis has asked for a very simple accommodation. Remove her name and her authority from the marriage certificates, which is what we have asked for from the very beginning. We believe the court could act on that. We believe the governor could act on that. And we believe the Kentucky assembly could act on that request as well. We will continue to assist Kim and pursue the multiple appeals she has filed.
-Today, Kim Davis joined us in a rally on her behalf!
This afternoon, Kim joined former Arkansas Governor, presidential candidate, and Liberty Counsel’s friend Mike Huckabee and me in an “I’m with Kim” rally outside the Carter County Detention Center where Kim Davis was held. This rally coincided with Liberty Counsel’s planned prayer event.
We are pleased that Kim Davis has been released. She can never recover the past six days of her life spent in an isolated jail cell, where she was incarcerated like a common criminal because of her conscience and religious convictions. She is now free to return to her family, her coworkers, and the office where she has faithfully served for the past 27 years.

And Brian Brown of the National Organisation for Marriage made these comments:

While we are thrilled that Kim is out of jail and back home with her family, it’s too soon to know if the case is resolved because the rogue federal judge who ordered her to jail in the first instance has told her she cannot interfere with deputy clerks who are issuing same-sex ‘marriage’ licenses in her name. This is wrong! The state of Kentucky has an obligation to provide clerks like her the ability to not be personally complicit in the lie of same-sex ‘marriage’ which violates her religious beliefs.
As Kim has asked since the beginning, and we have echoed, the state should take her name and reference to her position off the marriage license forms. Gov. Steve Beshear claims he can’t do that, but the state has already changed the forms at the request of gay activists, changing the terms ”Bride” and ”Groom” to ”Party 1” and ”Party 2.” Surely, if the license forms can be changed to accommodate the wishes of gay activists, they can be changed to accommodate clerks with religious objections to being personally connected to the lie that is same-sex marriage.
We don’t know what Kim will decide to do if the license forms are not changed, but NOM will stand with her to defend her religious liberty rights, as well as those of every other American who believes in marriage.
I am writing this from the stage of a huge rally at the Carter County Detention Center where hundreds of people joined to celebrate the good news that Kim is out of jail and to demand that people of faith be protected from gay activists and the judges that seem all too willing to do their bidding.
I reminded the gathered crowd that during the American founding, it was proposed that our national motto be, “Resistance to tyranny is obedience to God.” Throughout our history when unjust laws are promulgated by legislatures or courts, we have an obligation to resist. This was the case with slavery. It was the case with segregation. And it is the case with same-sex ‘marriage.’ My friends, same-sex ‘marriage’ is not the supreme law of the land, it is the supreme lie of the land. I urge you to stand for truth. Do not comply with unjust authority. Stand up to tyranny and don’t be shamed. We are united today in a just cause. Let us be a bold symbol and a bold light in a time of darkness.

Her case of course caused national and international outrage. Even some homosexuals thought the jailing was ridiculous. For example, Madonna’s homosexual brother Christopher Ciccone posted this message on Facebook a few days ago:

Since when are we the arbiter of other peoples faith?…..can you honestly say that you know how much a person is allowed to have??..if i’m not mistaken, it’s in the constitution…..something about religious freedom or something……selective shaming and bullying corrupts a democracy….freedom of press, speech and religion give it strength. Not to mention reason and the god given compassion we as humans have a right and responsibility to practice. Once again, the gay community feels the need to be sore winners. Is it so difficult to allow this women her religion?…or must we destroy her in order for here to betray her faith. No matter how we judge its truth. The rights we have all fought for, mean nothing, if we deny her hers.

He gets it. But many do not. As mentioned, this may well just be a temporary bit of freedom for Davis. She refuses to back down, as do the militants and their coercive statist allies. This is simply one small skirmish in a much bigger war. The homosexual assault on faith, family and freedom is one of the gravest threats we face today.

Anti-Christian persecution is the civil rights cause of our time. The cultural Marxists in power have seceded from our constitutional republican form of government, with its Judeo-Christian moorings, and have supplanted, in its place, a secular-socialist oligarchy. Like Union troops hunkered at Fort Sumter, faithful Christians are now exiles in our own land. Anti-Christian “progressives” have demanded unconditional surrender, and federal Judge David Bunning has fired the first mortar.
Even as I write, a kind, soft-spoken and well respected civil servant of 27 years sits languishing, like some violent criminal, in a Kentucky prison. She is confined, indefinitely and without benefit of a trial, to a tiny cell. She is a political prisoner in a spiritual war.

It sure is a spiritual war. And heaps of prayer went into this appalling case of a travesty of justice. It is of course terrific that Kim is now free – at least for a while. But the bigger war still rages all around us, and I predict that things will get much worse before they get better.

But in the meantime, thank God for Kim Davis.