The sexual revolutionaries obviously hate our children as they seem hell-bent on doing everything they can to destroy them. Of course in the process they are also destroying our families, our marriages and our societies. But the secular left crusaders don’t give a rip how much damage they cause as they push their appalling agendas.

Consider the social revolutionary occupying the White House who is promoting gender bender lunacy in our schools. One Illinois case has been in the news of late, and it is a real shocker: 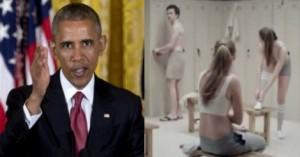 The U.S. Department of Education’s Office for Civil Rights has ordered a taxpayer-funded school district in the suburbs of Chicago to allow a male transgender student who dresses like a girl and otherwise identifies as female to use the girl’s locker room and shower on school premises. The feds delivered the edict against Township High School District 211 in Palatine, Ill. on Monday. The Department of Education has given the school district one month to let the student use the girl’s locker room. If the district does not capitulate, it risks losing federal funding.

Commentator Ben Shapiro made these remarks about this madness:

On Monday, the federal government declared itself fit for the madhouse by mandating that a Chicago high school allow a full biological male into the girls’ locker room for all purposes, including nudity. This biological male, the feds determined, was different because he thinks he is a female.
The feds have ruled that the presence of a twig-and-berries in the girls’ locker room has been mandated by Title IX of the Civil Rights Act. Yes, ladies and gents and non-cisgenders: it turns out that the battle against sexism enshrined in the ill-written Title IX was actually intended to force underage young women to look at the penises and testicles of mentally ill boys.

His concluding remarks are well worth sharing:

So here, in a nutshell, is the government’s new policy with regard to sex and sexuality among youngsters:
If you’re a boy who shows a picture of your penis to a girl in your class, you have likely violated both federal child pornography laws as well as local sexual harassment laws. If this happens consistently in your school, the school has violated Title IX.
If you’re a boy who says he’s a girl, the girl must be placed in position to see your penis and testicles. If the school does not allow this, the school has violated Title IX.
If you’re an adult who sexually touches a child with the consent of the child, you have committed a crime, since children are incapable of consent.
If you’re an adult who gives a child hormone therapy or surgery to prevent normal development of the genitals, with the consent of the child, you are a hero.
If this all makes sense to you, you should be working for the federal Office for Civil Rights at the Department of Education.
This is what happens when a society loses its moral moorings. In its quest to destroy God, the left unhitched its wagon from eternal truths and, instead, decided to substitute its own idea of utopia. To reach that utopia – freedom from social expectations and standards – objectivity itself had to be destroyed, so as to avoid blame. Objective truth lost all meaning; only subjectivity mattered. Science became the enemy, since it establishes provable truths; it had to be quashed and quelled. Language became the enemy, since definitions exclude people and things not covered by those definitions; it had to be perverted and hijacked.
And so we now live through the looking glass, waiting for the next philosophically incoherent ruling from our masters of time and space. Or mistresses. Or whatever.

Yes the moonbattery which reigns in our highest offices shows no signs of abating, but looks to be getting worse.

The diabolical gender benders are not getting their way everywhere thankfully. Plenty of concerned citizens are fighting back at this deplorable madness. Consider the US city of Houston which has just had a big victory on all this. The radical lesbian mayor wanted to impose the same lunacy there as Obama wants to do.

The Campaign for Houston was mobilised to oppose this radical social engineering agenda. It said this on its website:

We have come together to urge Houstonians to vote NO on Mayor Parker’s ordinance in the November 3rd city elections, because it would force our wives and daughters to share their restrooms, dressing rooms and locker-room showers with men. The ordinance gives new special privileges to two special interests, neither of which qualify as true “minorities” requiring special legal protection.
Mayor Parker’s ordinance is built on deception. It is not about protecting the rights of women, racial minorities, the disabled, elderly or military personnel. There are already important laws on the federal, state and local levels that protect such individuals from discrimination for employment, housing and access to public accommodations. The ordinance’s naming of these groups is a ruse in an attempt to hide the ordinance’s real purpose, which is to make “sexual orientation” and “gender identification” two new protected classes.
Campaign for Houston is made up of parents and family members who do not want their daughters, sisters or mothers forced to share restrooms in public facilities with gender-confused men, who – under this ordinance – can call themselves “women” on a whim and use women’s restrooms whenever they wish. This “bathroom ordinance” therefore is an attempt to re-structure society to fit a societal vision we simply do not share or can support.
The ordinance also limits free speech and religious expression in unprecedented ways so as to not “offend” these two new “protected” groups, both of which are defined by their behaviors – not by characteristics given to them at birth.

And in yesterday’s election the Mayor’s sinister agenda was handed a resounding slap in the face. Another site proclaimed the victory:

Mayor Anise Parker’s insane civil rights proposition designed to hide an ordinance allowing boys in girls bathrooms went down in flames at the ballot box. The liberals picked a fight they shouldn’t have, now they have a huge loss at their feet.
The writing was on the wall even before the full tally came in Tuesday night. Early voting results showed that 62.5 percent of voters backed repealing the ordinance, compared with 37.5 percent supporting it.
Houston Mayor Annise Parker was dealt a death blow to her bathroom ordinance that allowed men to use women’s restrooms by the Texas Supreme Court and the Voters!
Mayor Anise Parker had tried every trick in the book to get her ordinance allowing males to use female restrooms, locker rooms and showers, but her opposition was relentless.
Campaign for Houston, led by Dr. Steven Hotze fought the ordinance in a number of formats and this Texas Supreme Court ordered vote by the citizens of Houston has spoken volumes.
Our own Joe Wurzelbacher and #TeamJoe, along with Liberty Alliance teamed up with Dr. Hotze to make sure all Houstonians understood what was under the deception, reaching far and wide to make sure the story was told.

By the crushing margin of 62 percent to 38 percent, on Tuesday, voters in Houston, Texas, rejected an extreme “anti-discrimination” ordinance that had been passed last year by the city council….
The most controversial aspect of the bill was the requirement that individuals suffering from gender confusion or identifying as the opposite sex be allowed to use whichever gender segregated bathroom facilities they chose, regardless of how that might infringe on the privacy of others. Such ordinances are often referred to as “bathroom bills” because they allow men who claim to be women to use women’s bathrooms, locker rooms, showers, dressing rooms, etc. Increasingly, municipalities and institutions are adopting such ordinances, and the list of problems this has created continues to grow.
Gender Dysphoria, the most severe manifestation of gender confusion, is recognized as a mental disorder by the mental health profession. Some of the most respected therapists dealing with the disorder say that accommodating and validating those with this disorder as these ordinances do is actually harmful for those suffering with the disorder. Instead, they need to be encouraged to seek psychotherapy. In other words, if the bathroom bill passed, it might have been harmful to the very people it was intended to help.

That was certainly a big win indeed – a vote for sanity, morality and especially for our children. But the enemies of those three things are never content – they will keep on going until their job is done: the complete destruction of the West and the imposition on hapless humanity of their coercive utopian nightmare.