America has a new Supreme Court Justice, 53-year-old Brett Kavanaugh. The months’ long process culminated in a Senate 51-49 “cloture” vote on Friday. Alaska Senator Lisa Murkowski was the only Republican to vote against him, while West Virginia Democrat Joe Manchin voted for him.

And then in the final vote on Saturday, the outcome was 50 yes and 48 no. A Republican pairing of a yes and no voter – Montana Senator Steve Daines, who attended his daughter’s wedding, and  Lisa Murkowski – resulted in that final count.

Just hours after the vote he was sworn in as the 114th Supreme Court justice. Hopefully the conservative judge will help bring the highest US court back to a more conservative stance, giving it a conservative majority – the first one in a very long time. 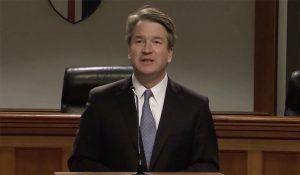 Many leaders have sent their congratulations. For example, Marjorie Dannenfelser, president of the prolife Susan B. Anthony List said this:

We congratulate Justice Kavanaugh on his well-deserved and hard-earned confirmation. The balance of the Supreme Court has shifted back toward one that respects the will of the voters expressed through their representatives. As Justice Kavanaugh takes his seat on the bench of the nation’s highest court alongside Justice Neil Gorsuch, we are confident he will continue to rule with the same fairness and independence that have characterized his entire legal career.
www.sba-list.org/newsroom/press-releases/kavanaugh-confirmation-resounding-victory-for-american-people

But all this of course has the left going troppo. As but one example, the leftist CNN is clearly bent out of shape about it all: “The conservative majority will have a sweeping impact on American life, possibly for decades, on issues that are at the epicenter of the nation’s poisoned political debate including LGBT rights, the limits on presidential power, campaign finance, abortion and the role of religion in society.”

Three months ago I wrote about his initial nomination by Donald Trump, predicting a bumpy ride along the way: billmuehlenberg.com/2018/07/10/kavanaugh-scotus-and-abortion/

And it certainly has been that – and more. Many Democrats made it clear from day one that they would oppose Kavanaugh – or any Trump nominee. He could have named Santa Claus and the left would have instantly gone into attack mode. That is how the political left now operates in America.

They hated Kavanaugh long before any allegations of sexual impropriety were bandied about. Simply being a prolife conservative was enough to drive them over the edge. All their dirty tricks, smear campaigns and shonky allegations did not cut it however.

The left sought to accuse him of every crime under the sun. All they needed to do was claim he was responsible for the Black Plague, the Great Depression, and my burnt toast this morning. Welcome to leftist “justice” where everything is now politicised, and everyone is now guilty by simple declaration.

Now they are stuck with the guy however. Of course many Democrats/leftists are already talking of impeachment and the like. Sore losers seldom accept an electoral verdict. They won’t take this sitting down, and the war will continue. As mentioned, much of this centres of what has become the ultimate god for Democrats: abortion on demand.

There is nothing more sacred for the ever leftist-moving Democrats than the sacrament of baby killing. This has become something they will fight for to the bitter death. Many commentators could be brought into the discussion here. John Carne recently put it this way:

In 1973, the Supreme Court conjured up Roe v. Wade, which, by usurping the role of the legislative branch of government, has led to the deaths of 60-plus million children. Undercutting the role of the states as laboratories of public opinion and morality, the court froze in time an abortion regime that has become more abhorrent as science has given us the tools to see very clearly the progress of the child in the womb, and marginalized the proper role of state government. How many women, when pregnant with a “wanted” child, have been stricken with anguish over their “personal” choice? One can only wonder at what the collective guilt and anguish are doing to our country. It has certainly skewed the morality of our people in ways too numerous to recount.

I suggest that the Democratic Party, which fancies itself the home of oppressed groups such as women, is obsessed with abortion precisely for the reason that collectively, its members cannot bring themselves to admit their guilt and work to restrict and eliminate this scourge. Like a three-year-old caught in a lie, abortion-supporters will become more shrill and strident…
www.americanthinker.com/blog/2018/10/abortion_drives_the_extreme_behavior_of_the_democratic_party.html

Without question things will simply get even more ugly in the days ahead. Indeed, the only thing more newsworthy – and consequential – than Kavanaugh’s narrow Senate win was the spectacle of ugly mob warfare by the militant left. What we witnessed the past month or so was simply astounding.

The Democratic Party has now shifted so far to the left that it may actually help the Republicans in the mid-term elections next month. So just “when did the Democratic Party become Antifa?” asks Daniel Flynn. “Apparently when they tasted the appeal of Bolshevism.”
spectator.org/when-did-the-democratic-party-become-antifa/

Yep, it’s Bolshevism alright. And if you thought the mob violence, screaming, hysterics, emotional meltdowns and pandemonium was bad before the vote, just wait and see what comes next. The radical left has long ago given up on quaint things like debate, reason and argumentation. All they do now is resort to mobocracy.

Taking to the streets, screaming at the top of their lungs, abusing anyone who disagrees, and going on a juvenile rampage is all they seem to know how to do of late. Civilised discussion is a waste of time for them – manning the barricades and acting like spoiled brats is now their preferred form of expression.

Temper tantrums and Soros-funded marchers resorting to mayhem on the streets is how the left does business today. The demons have come out big time as the “right” to kill babies might just get a look-in someday by the courts. The thought of any sort of review of that idol of Moloch, along with its twisted sister, the unfettered sexual revolution, has the left going apoplectic.

As David French discovered: “It took me a long time to realize the following truth: No matter how compassionate, charitable, winsome, and kind you are, if you oppose the sexual revolution you are the enemy. And in many ways, you’re not merely the political ‘enemy,’ you’re also a reprehensible human being.”

The sheer hatred, bitterness and bile coming from the left because of Kavanaugh and what he represents – faith, family and life values – tells us all we need to know about where they are coming from. And this utterly irrational enmity and diabolical derision may well lead America into another civil war.

These are frightening days indeed. While we must continue to stand up in the political, cultural and ideological battles of the day, if you are a person of faith, just as important – if not more so – is the need to enter into the spiritual war that undergirds all of this. Things are getting that ominous.

In the meantime, well done to Trump, Kavanaugh, and all those who helped him to get across the line. It was a major battle, but the war continues. And the new justice and his family will also keep needing our prayers. So please do.

15 Replies to “The Kavanaugh Confirmation”