The death of the West – more utterly horrific cases of trans tyranny and fascism:

Let’s face it: like the homosexual activists before them, the trans activists do not want mere acceptance. What they want – and demand – is complete endorsement, approval and affirmation. If you dare to differ, you WILL suffer some serious consequences. 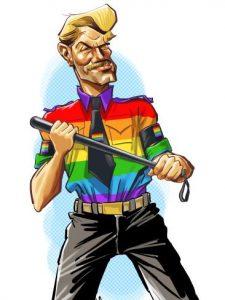 The consequences are very real indeed. Just as so many Christians and others have lost their jobs, been fined, or even jailed for daring to stand for truth and reality while saying no to homosexual hegemony, so too now they are being attacked mercilessly by the trans tyrants.

The cases of this are now almost daily occurrences. One simply has to wait a day or two for the next outrageous case to turn up. So let me offer you yet more cases of this trans tyranny in action. These three shocking new cases come from the US and the UK.

Let’s look at a September 20 headline: “Esteemed professor of pediatrics fired after questioning dangerous medical treatment of children with gender confusion.” The article opens with these words:

A distinguished professor of pediatrics has been fired after questioning dangerous and aggressive medical treatments for children with gender confusion. Dr Allan Josephson made the comments in 2017, during a panel discussion at the Heritage Foundation when asked about the medicalisation of children suffering gender dysphoria.

According to Travis Barham, an attorney with the Alliance Defending Freedom: “[Dr Josephson] simply raised a very common-sense notion that we should explore what’s going on in the child’s life, what sort of psychiatric issues the child might be facing before we undertake any further more aggressive medical treatment.” Following his remarks, Dr Josephson, the Division Chief of Child and Adolescent Psychiatry and Psychology at the University of Louisville, was demoted and then effectively fired by the university, despite receiving perfect marks on his annual evaluation for the three consecutive years prior.

Earlier this year, Dr Josephson told the National Review:  “…it became clear that a few on my faculty were upset with some of the things that I’d said. Within a few short weeks — it was stunning how quickly it occurred — I was removed from my leadership position and then, within the next year, subjected to fairly hostile work-environment situations and, finally, not that long ago, informed that my contract would not be renewed when it ended on June 30.” caldronpool.com/esteemed-professor-of-pediatrics-fired-after-questioning-dangerous-medical-treatment-of-children-with-gender-confusion/

Wow. Simply standing up for children and their wellbeing means you will now be in the crosshairs of the trans militants, and they will not rest until you are persecuted and hounded out of your career. Who would have even contemplated this happening just a few short decades ago?

My next two cases come from the UK, and they are just as unbelievable. The first case – of just a few days ago – concerns an actress who lost her career simply for putting a biblical post on Facebook some years ago. As one writeup explains:

A Christian West End actress, Seyi Omooba, was removed from a leading role in a musical and dropped from her agency for a Facebook post citing the Bible over four years earlier. With help from the Christian Legal Centre, she is launching a legal challenge of the theatre and the agency. The case raised the question of whether Christians have the freedom to hold and express Biblical mainstream views in public. It also raises the issue of whether, as a society, we are allowed to hold and express opinions and interpretations of art, literature and drama in ways that are contrary to LGBT ideology.

Seyi had developed her raw, God-given talent from a young age singing gospel in church and studying performing arts at Anglia Ruskin University. On 14 March 2019, Seyi was given the lead role as Celie in a production of the award-winning musical The Color Purple, based on Alice Walker’s classic American novel.

The casting was announced on the same day that Seyi went with her father, Pastor Ade Omooba (Christian Concern’s co-founder), to Buckingham Palace to receive his MBE. After the cast was announced, however, Seyi was tagged on Twitter by another West End performer who criticised her for a Facebook post that Seyi had posted four-and-half-years ago. christianconcern.com/news/actress-hounded-out-of-career-for-biblical-facebook-post/

Andrea Williams, chief executive of the Christian Legal Centre, features in this and my next case. She said this about the actress: “What happened to Seyi Omooba was cruel and has damaged the career of a highly talented young artist for a Facebook post she had made four years earlier. This is another in a string of cases involving Christians being hounded out of their careers because they love Jesus.”

The final case, which has just appeared today in the media, is another example of ugly anti-Christian bigotry and the war against faith and freedom. It involves a Christian doctor who has lost his job over more trans insanity. And worse yet, the court ruled that belief in the Bible was “incompatible with human dignity.” Yes, you read that right. The story is this:

That statement came in a case involving Dr. David Mackereth, a devout Christian who had worked as an emergency doctor for the National Health Service for 26 years. He said he was fired from his job because he refused to call a biological man a woman. The court’s ruling stated: “Belief in Genesis 1:27, lack of belief in transgenderism and conscientious objection to transgenderism in our judgment are incompatible with human dignity and conflict with the fundamental rights of others, specifically here, transgender individuals.” The court added. “… in so far as those beliefs form part of his wider faith, his wider faith also does not satisfy the requirement of being worthy of respect in a democratic society, not incompatible with human dignity and not in conflict with the fundamental rights of others.”

The Telegraph reported that Mackereth said he was removed from his job with the Department of Work and Pensions (DWP) in late June 2018 after his boss “interrogated” him about his personal religious convictions. Mackereth told the court in July that his line manager had asked him, “If you have a man six foot tall with a beard who says he wants to be addressed as ‘she’ and ‘Mrs’ would you do that?” Mackereth said that because of his religious beliefs, he could not, and his job was subsequently terminated. www.dailywire.com/news/british-court-in-transgender-case-bible-belief-is-incompatible-with-human-dignity

As Dr. Mackereth had said a few months earlier:

Someone who presents quite obviously as male is entitled to say “Call me Mrs” or “Call me she”, but the question is, am I legally obliged to do that? And if you are legally obliged to refer to patients in a way your conscience does not allow, does that mean you are no longer fit to be a doctor?

This case is all about whether I am legally clear to say — on the grounds of my religious conscience — “No, I can’t call you ‘she’ or ‘he’, not because I want to hurt you or don’t accept you, but because my Christian convictions simply won’t allow me to do that”. The pronouns “he” and “she”, in particular, are like the glue that holds our language together.

Words can be more powerful than atomic bombs if used in a new way. If they become fluid in their meaning, and are used in an arbitrary way, they then simply become meaningless. Add to that the legal sanctions if you misgender someone, and I believe we have a very complicated and troubling problem on our hands. We could be on the verge of committing a hate crime for simply using the wrong pronoun. archbishopcranmer.com/if-a-christian-doctor-can-be-forced-to-deny-biology-there-is-no-hope-for-theology/

Andrea Williams said this about the case: “This is an astonishing judgment and one that if upheld will have seismic consequences not just for the NHS and for Christians, but anyone in the work place who is prepared to believe and say that we are created male and female. It is deeply disturbing that this is the first time in the history of English law that a judge has ruled that free citizens must engage in compelled speech. Here Judge Perry has ruled that Christianity is not protected by the Equality Act or the ECHR, unless it is a version of Christianity which recognises transgenderism and rejects a belief in Genesis 1:27.”

As these cases make perfectly clear, the trans militants will not rest until every man, woman and child on the planet bows down before their diabolical agenda. We will all be forced to deny reality, to deny biology, and to deny our own faith traditions – or we will have to face the music.

The three abhorrent cases featured here are just the tip of the iceberg. I have documented numerous other such cases on this site. Indeed, this is now my 193rd article on the trans revolution – spanning only several years. This is spiralling out of control at an alarming rate.

Who will be next? Wait just an hour or two and we will likely know who has next been targeted. And how long before the activists demand that my website be pulled down, and I am forced to recant? I fully expect it is simply a matter of time now. If and when it does happen, I will absolutely and resolutely resist it, saying with another famous fighter, “Here I stand, I can do no other.”