What are we to make of Amy Coney Barrett, the possible Trump nominee for SCOTUS?

With the passing of justice Ruth Bader Ginsburg today, the US Supreme Court is down to eight justices. Ginsburg died of cancer at age 87. So now there is the contentious – even explosive – issue of finding a replacement for her. And with just 45 days left before the November 3 election, there will be a battle royale going on. 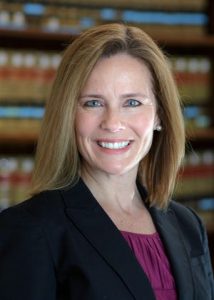 Regardless of whoever is going to be selected by Trump, the Democrats will fight the nominee tooth and nail. Indeed, they will do all they can to prevent Trump from even getting anyone nominated and voted on before the election. They are counting on Trump losing the election, hoping the Dems can then nominate another leftist justice in the new year.

There are various options for Trump as to who he might name as his preferred candidate for the Supreme Court vacancy left by Ginsburg, including folks like Sen. Tom Cotton of Arkansas. But one clear frontrunner is Amy Coney Barrett from Chicago. The 48-year-old is a prolife conservative who formerly worked for justice Scalia. She studied law at the University of Notre Dame and had been a long-time law professor there.

The choice will likely get down to her and a handful of others. While Barrett has had only three years of bench experience, she is more than qualified for the post. But because of her shorter experience, it is not fully clear where she will stand on all the key issues, and how conservative and constitutional she will be.

But given how much the left and the Democrats are already demonising her, the Catholic jurist could be a good choice. Her conservativism however is somewhat of a mixed bag. She opposes the death penalty, citing Catholic teaching. See here however for a different take on this: www.billmuehlenberg.com/2011/05/05/killing-and-catholic-social-teaching/

But for the left and the Democrats this is going to be a fight to the death. Trump’s earlier conservative nominees, Neil Gorsuch and Brett Kavanaugh did manage to get in. But as Robert A. J. Gagnon has remarked:

Roberts [appointed by George W. Bush in 2005] has gone Left. Gorsuch betrayed his own principles in treating “sex” in civil rights non-discrimination law as including “gender identity” and “sexual orientation.” We need a good pick. As a SCOTUS justice, Ginsburg was a disaster for the nation, someone who often amended the Constitution under the guise of “interpreting” it, including the infamous “gay marriage” decision. Her death is a reminder of the importance of casting an effective vote against leftist Biden and hard-left Harris who would likely succeed Biden in his first term.

If Barrett is nominated and does get in, the other side knows that their entire agenda will be at risk, including their most sacred cow of all – abortion on demand. The Democrats will simply oppose any Trump nominees, and with the possibility of a prolifer up for the vote, the battle will be intense. The left knows that if she gets in, their crown jewel, Roe v Wade, could well be up for grabs. The 1973 SCOTUS decision rocked the world in terms of the “right” to kill babies.

The laws of 50 American states were knocked down when seven justices claimed that abortion was somehow a constitutional right. It is not of course, and if overturned, the issue would go back to where it more properly belongs: to the states. The Dems cannot stomach the thought of this happening, so they have declared all-out war on this.

But all this is not all that certain. Bear in mind that during the Reagan years the majority of the nine justices were Republicans and “conservative”. Yet nothing happened then on the abortion issue. Thus there is no guarantee that if Barrett gets in, the ’73 decision will be revisited.

So it is early days yet. The fight will be hardcore, and the Democrats will pull out every dirty trick in the book. They have already said she belongs to a cult. But to see how utterly hysterical and demonic the hyper leftists are, consider a few pieces penned several years ago on the “threat” of Barrett. As one example, take Courtney Enlow’s piece for the HuffPost, entitled “There’s A Special Place In Hell For Women Who Gut Abortion Rights.” www.huffingtonpost.com/entry/opinion-enlow-coney-barrett-abortion-roe-feminism_us_5b3bc164e4b09e4a8b281782

Her entire piece was all rather revealing, and it ended with these words: “We cannot blindly support women who would prefer that we — any of us — remain in shackles, and even be forced back into old ones.” But it is not just the usual suspects who are hyperventilating about this.

Sadly there are various pseudo-conservatives who also have gotten bent out of shape about a possible challenge to Roe v Wade. A clear case in point was the faux conservative Tomi Lahren who had warned a few years ago that it would be a “big mistake” to overturn it. www.huffingtonpost.com.au/entry/tomi-lahren-pro-roe-v-wade_us_5b42396ce4b07b827cc1cb65

But real deal conservatives were quick to put her in her place. For example, Kevin McCullough wrote an impassioned piece, denouncing her dodgy version of conservatism. He blasted her “Six Lies About SCOTUS & the Right To Life.” He began:

I don’t generally like the practice of criticizing fellow conservatives. Then again actual conservatives—at least ones I know—have never uttered the words, that to “overturn Roe v. Wade would be a big mistake.” Those are words spoken by liberals, progressives, and millennials who count their own voice as being quite important to “the cause.” To amplify the matter that same said “conservative” follows it up with even worse tripe.

Here are two of his six points:

4. She is hypocritical on “Government dictating the outcome.” Of all the dishonest things she says in the few sentences I quote here this is on par with the most brazenly dishonest I’ve ever seen. In the longer version of the video she attempts to say that “culture and church and civic groups” should be the ones who control the moral question of the matter, yet those entities are made up entirely of people who presumably would be acting on their convictions when it comes to voting and to pursuing legislative and governmental outcomes—especially in a free country. Additionally, the fact that government has been the entity that sealed the fate of more than 60 million “legally killed” children seems to be wholesale ignored by the ignorance or dishonesty of the statement. This is the guttersnipe argument we expect from people who vote for Nancy Pelosi. This is not the viewpoint of those who voted for the disruptive presidency of Donald Trump with the expectation that he would come in and make significant course correction.

5. She is not “personally a person who would choose life.” She uses this statement exactly the way John Kerry did in his presidential run against President Bush. He repeatedly referred to his Catholic faith and how he “personally” viewed the matter in some way different than how he would effectively serve as an executive or as he had as a Senator. The issue of life doesn’t work this way however. Because the issue is not about the trial, trauma some statistically nearly impossible scenario that somehow concerns the woman’s feelings. The issue pertains exclusively to the matter of the other person that is involved in every pregnancy—the child itself. If the child is a living human being, it is morally right for that child to both “live” and to be able to “pursue happiness.” Dress it up any other way you wish. Make up any scenario you want. The moral issue is the soul of the person being killed and God is unequivocal in His assertion that He created it, and it is good.

He concluded this way:

Her lack of clarity on this simple issue in and of itself is cause for nearly complete disqualification from the conservative cause because it is a worldview at odds with what makes conservatism the superior political pursuit. She lacks a moral root. Saying it may be discomforting for her—it should—at least for the hope of persuading her to approach the issue with greater consistency. I don’t like to criticize fellow conservatives. But these points needed to be made.

These are talking points from the Godless and extreme American political, societal, and theological left. They serve no place in a country that wishes to seek the greatest moral good possible. And they certainly serve no use in the discussion of the Supreme Court when there is an opportunity to right an historic wrong that visited the worst mass killing in history upon a nation that seeks to be blessed by God. townhall.com/columnists/kevinmccullough/2018/07/08/tomi-lahrens-six-lies-about-scotus–the-right-to-life-n2498220

There is at least one other aging more or less liberal justice (Stephen Breyer is 82), and if the Trump presidency gets a second term, there are likely to be one or more vacancies to arise, with other possible conservative nominees to come. So all this may be the part of a major turnaround in the US. Time will tell.

3 Replies to “Barrett, SCOTUS and Abortion”