Now the Dictator wants Victorians locked down indefinitely, with arbitrary arrests being planned:

There are few things more dangerous than an arrogant and out-of-control political ruler who has a messiah complex and a horde of cult followers. History tells us exactly where that leads to – think of last century in Germany for starters. And we are seeing it now played out in shocking detail here in Victoria. 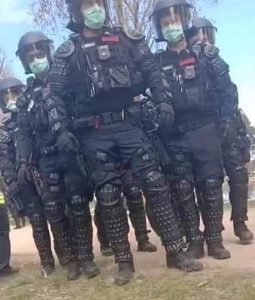 Consider the latest and most alarming push by Dan Andrews for even more complete power and control over every aspect of the lives of Victorians – especially those who dare to ask questions of what he and his government are doing to freedom, democracy and human rights. As one news report states:

The Victorian Government is hoping to push through a new bill that would allow them to detain “high-risk” coronavirus spreaders. The powers would be applied to those who health authorities believe would negligently spread the deadly virus as Victoria works to bring its coronavirus outbreak under control. The rules, seen by The Age, would be a six-month extension of the ones made in April, taking the detaining powers to March next year. Anyone deemed high risk by health authorities could be forcibly detained under the extension of powers including conspiracy theorists or anti-lockdown protesters who refuse to isolate. www.news.com.au/lifestyle/health/health-problems/victoria-fights-for-power-to-detain-highrisk-covid19-spreaders/news-story/33249f1a2311506b14c071c8399eb4b1

This should frighten every single Victorian, no matter how much you may see him as the messiah. Indeed, when you have even leftist groups warning about this swing into tyranny, then you know it is getting really bad. Liberty Victoria is meant to be on the side of, well, liberty, but it is mainly known for siding with the left, and with Labor. And that is true of its President, Julian Burnside. But he said this in part about the proposed changes:

Liberty Victoria is very concerned about the new powers sought to be introduced by the COVID-19 (Emergency Measures) Bill. In particular, we are concerned about how the new powers of what seems to be preventative detention will affect vulnerable people. We have previously publicly discussed these concerns in the media.

There are already powers to detain in the Public Health and Well-being Act (PHW Act) and the Government has not explained why these additional powers are needed. We are deeply concerned about how the existing detention powers have already been exercised, in particular at the housing commission towers, as noted in our submission to the COVID-19 inquiry.

We are particularly concerned by cl 16 of the Bill, which seeks to expand police powers and introduce a preventative detention regime under the Public Health and Wellbeing Act. Little (if any) evidence has been put forward which justifies these powers. libertyvictoria.org.au/content/liberty-victoria-very-concerned-about-proposed-new-powers-introduced-covid-19-emergency

Many others have spoken out about this frightening move by Andrews and his Labor tyrants. Political advisor Ian Hanke, for example, speaks of “Daniel Andrews’ plan for indefinite detention – and more”. He writes:

The Victorian Labor government has introduced a bill to parliament that coupled with other measures is one of the most egregious attacks on civil liberties seen in war or peacetime. The Bill would allow people to be detained indefinitely and give sweeping powers to untrained people to become “authorised officers” with sweeping powers to arrest and detain fellow Victorians.

Called the COVID-19 Omnibus (Emergency Measures) Amendment Bill, it overrides all other laws and legislation with the exception of the Charter of Human Rights (which the government ignores as it is not binding), the State Constitution Act 1975 and the laws created by the Bill itself.

The Bill confers an extraordinary power to the Secretary of the Department of Health to appoint public servants as “authorised officers” with the same powers as police. However worse than that is a provision which allows the secretary to appoint any of the following as an “authorised officer”….

These powers given to untrained “authorised officers” could lead to shocking outcomes, particularly if citizens can be co-opted to assist. We have already seen examples of police heavy handedness in Victoria with police raids on housewives, the busting down of doors and so on simply because people have promoted on social media protests against the current health regime….

Put simply, this means you can be locked up and detained indefinitely at the whim of a designated officer. There is no provision whatsoever for a review of the detention. Ultimately a person may have to apply to the Supreme Court to grant an order of Habeas Corpus for release. These extraordinary powers are arbitrary and extreme.

They are a draconian attack on civil liberties the like of which Australia has never seen before. Further because all laws are overridden there would appear to be little recourse to any excesses by an authorised officer or their civilians co–opted by them. These laws are so broad and ill-defined that you could be detained for almost anything.

These laws will operate side by side with the powers that already have Melburnians locked in their own homes for 22 hours a day; where the first-ever curfew in Australia’s history is in place; where freedom of movement is banned; where police and ADF personnel patrol the streets to enforce mask-wearing; where $5000 fines are handed out if you attempt to breach internal state borders and so on.

These proposed laws are unjust, unnecessary and unjustified. They are a direct attack on citizens’ civil liberties. Even if this Bill is not passed it says much about the mindset of the Victorian government that it is prepared to assail its citizens’ rights. This Bill is a direct assault on our democracy. It should be rejected by the parliament. www.spectator.com.au/2020/09/daniel-andrews-plan-for-indefinite-detention-and-more/

The most ominous aspect of this is the notion of “pre-crime”. Citizens who have committed no crimes can still be detained! As another writeup puts it:

Mainstream media are finally reporting on the Victorian government’s new bill to hand authorities the power to arrest anyone, even if they have not committed an offence. 10 News Melbourne reports: “[The] new law would give police the power to preemptively detain anyone with COVID or their close contacts even if they haven’t broken the law. All that’s required is that the officer thinks they might breach restrictions in the future.” caldronpool.com/pre-crime-victorian-government-pushes-for-powers-to-preemptively-arrest-anyone-even-if-they-havent-broken-the-law/

Thankfully the Victorian Liberal Party is opposing this bill. The Bayswater Liberals for example put out this message:

Labor wants even more power, more control and even more restrictions over Victorians. The COVID-19 Omnibus Bill allows for the Andrews Government to appoint virtually anyone (including private security guards) as Authorised Officers with wide-ranging powers including entry, search, seizure and detention. It allows for Authorised Officers to preemptively detain a ‘high-risk’ individual who they think may not comply with the law. No reasonable Victorian could support some of the measures in Labor’s bill. That’s why the Liberal Nationals will be opposing it.

The Victorian Liberal Nationals will vigorously oppose this unprecedented grab for power. At a time of crisis, rather than bypassing Parliament, the institutions we rely upon for our freedom and liberties are more important. No government should write itself a blank cheque for such extraordinary powers over Victorians’ lives and livelihoods. State of Emergency powers must only operate under appropriate safeguards and scrutiny. Any attempt by the Andrews Labor Government to give itself such enormous powers, particularly in the absence of any enhanced accountability measures is dangerous to our democracy and your rights as a citizen.

The link to the above offers Victorians the chance to tell Dan Andrews what they think of these dictatorial powers. Please do: www.michaelobrien.com.au/have-your-say-labors-state-of-emergency-extension/

This government has utterly lost it. Andrews is on the most reckless and most dangerous power trip perhaps ever witnessed in Australian history. He MUST be stopped now, before he completely destroys this state – and all of our freedoms.