Eight years ago the Australian state of Victoria passed one of the most liberal (read: most anti-baby) abortion laws in the world. So for eight years now we have been marching for the babies. Today was another chance for thousands of Victorians – and others – to tell the world we care about babies, and that it is wrong to murder thousands of them every year.

A beautiful Melbourne afternoon made it a great day to march, and having no protestors there trying to break up the rally, shout us down, and show how ‘loving’ they are was also a great plus. Perhaps it occurred to them that all the bad publicity they get each year when they engage in their frenetic and ugly activities was proving to be counterproductive, or they were at another rally in the city taking place at the same time.

There was a large police presence at our march, as there has been for the past few years, which may also be part of the reason why the protestors stayed away this year. The police have been doing a superlative job lately in keeping them away from the thousands of peaceful prolife marchers, which includes plenty of children, parent and grandparents.

In fact an article in this morning’s Herald Sun spoke about the police presence at both rallies:

Police will be out in force in Melbourne CBD today with two separate protests planned in the city. The Equal Love Rally for Marriage Equality will be held at the State Library of Victoria between 1pm and 3pm. Anti-abortion protesters will also be staging a demonstration in the city this afternoon.
A Victoria Police spokeswoman said: “Those in the Melbourne CBD today might see a larger than normal police presence due to two scheduled protests this afternoon. While there are no expected threats, the extra police will be on hand to ensure community safety and so visitors to the city can go about their business with as few disruptions as possible.” 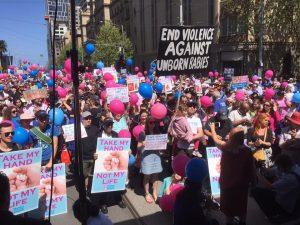 But wait a minute, notice how even this short piece has all the usual bias and prejudice. Did they call the other rally an ‘anti-marriage and anti-family’ event as it really was? No, they used the very name provided by the organisers.

Yet for our march they called it an ‘anti-abortion’ action, instead of what it really was: “March for the Babies: Equality for the Unborn”. So once again the media allowed the secular left to set the agenda on all these matters. So I was quite interested to see what the six o’clock news would have to say about the two rallies.

I flicked back and forth between channels 7 and 9, and could find nothing! There would be good reasons for this it seems. As to our march, the media does not want to give our side any airtime. They do not want the truth about the slaughter of the innocents to get out into the general public – so they suppress as much of it as they can.

It seems the only reason they broadcasted it in past years was because the protestors were there. The media thrives on controversy, and on putting their own spin on it. So in past rallies we might have had 50 protestors screaming their lungs out seeking to cause as much turmoil as they could, and 4-5000 peaceful pro-lifers, but the evening news would run with a story like this: ‘Anti-abortion protestors clashed with pro-choice supporters”.

So there was no coverage at all it seems. But why did they also not seem to cover the ‘homosexual marriage’ rally? Well, there might be a very good reason for that as well: I went to an online Melbourne homosexual site to see how they reported it, and they had pics of the event. Judging by those photos, perhaps only 25 or 30 people showed up! No wonder they did not want to run with a story like that.

If maybe at least 50 people or so showed up, the media could have put their usual spin on it: ‘Hundreds rally for equal love, blah blah…’ So no major media coverage that I could see on either one.

But let me get back to our rally. As usual, we met at the Treasury Gardens, and then marched peacefully and cheerfully with balloons and banners to Parliament House. Liberal MP Bernie Finn again led the proceedings, with three main speakers: MLC Dr Rachel Carling-Jenkins, Dr Roland von Marburg, and Kay Painter from the US.

All gave terrific talks, reminding us of why we march each year: because we love the babies and we love the women who so often are being forced to have them killed. And Kay told of a young American gal who worked all year to save money so she could make the trip just to be with us at the rally this year. She gave us a brief greeting. Now that is commitment. Yet some Australians think travelling 50 kilometres is too much!

After a rousing singing of Amazing Grace we then marched some more – this time, as we did at least once before – to the infamous abortion mill in East Melbourne. This time however things were a bit different. While in the past we could go right up to this institution of death, this time we were prevented from doing so.

You see, another evil act of Parliament passed under the Dan Andrews’ Labor Government was a diabolical buffer zone law which actually prevents all concerned pro-lifers from coming within 150 metres of this killing fields. Imagine that: the state government actively promotes and encourages the killing of little unborn babies in this facility – and others like it – but has made it illegal to go anywhere near it.

Even if you just want to silently and peacefully pray there, or offer women some loving care if they want it, the state has said this is verboten. So, baby killing is fine, but loving women and their babies is out of bounds. How perverted is that?

Let me close by sharing the story of a good friend of mine who was at the rally. He had a very interesting conversation with a lone pro-abort while near the East Melbourne abortuary, and it is well worth sharing here:

This afternoon I had the satisfaction of taking the smarmy grin off a Sex Party supporter’s face at March For the Babies exactly 150 metres from the East Melbourne abortion mill. Standing a few metres from me, he tried to look mock outraged at the comparison of abortion to Auschwitz that Bernie Finn made during a speech to the crowd… and something inside me snapped.
I have had more than enough of people who want to effectively facilitate learning nothing from history, especially when I have actually walked the railway line inside Camp II all the way up to where the gas chambers were filled with people and Zyklon B, and the ovens ran hot. A major reason the Holocaust happened was that some people had convinced themselves that these people weren’t human – exactly the same today as people convince themselves the unborn are not deserving of full human rights.
So I stopped filming Bernie and walked up to this guy and asked him why he laughed at the comparison. I told him I saw him laugh and I wanted to know why he thought that was funny. He just tried to wave me away but I made sure he remembered he couldn’t answer the question. He was snickering just a few seconds before, but now didn’t have the guts to tell me why. I was angry but I didn’t shout at him or anything, but he sure was whining to police when I walked away. Poor snowflake thought I ‘got in his face’, when really I only went within about a metre of him and confronted him with his own shallow morality.
I have to admit, my response even surprised myself, but I couldn’t take this guy’s inward mockery and flat out evil any more. Honestly, I cannot adequately convey just how much I would like to formally debate any of these leftist clowns one-on-one, especially on this topic. The unborn are human, anything else as a primary consideration on this topic is twisting truth. And on the way home, how chilling the realisation was to me that the line of police stopping the protest at the buffer zone boundary were empowered by politicians in power who thought just like that regressive Sex Party extremist.
I was born in East Melbourne to German parents who grew up in the Nazi era and saw much of it firsthand. Yeah, I think my patience wears a little thin now and then on some things, especially basic human rights for life and freedom. Did you enjoy our glorious spring day? About 20,000 Victorians annually never get to see just one.

15 Replies to “Standing Up For the Babies, Again”