Whenever the abortion debate comes up, you can expect some pretty wild and woolly offerings from the pro-death camp. They seem to thrive on ad hominem attacks, non-sequiturs, red herrings, emotionalism, and just plain lunacy when it comes to defending their case. 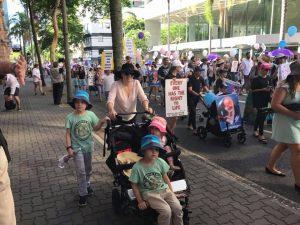 Logic, fact, reason and reality seem to be missing as we hear them screaming in their bullhorns, waving their placards, and trolling online or in the news media. We saw all this happening again with the pro-life rally held in Brisbane yesterday.

Despite soaring temperatures, the marchers braved the searing sun to stand for the most vulnerable and defenceless in our community – the unborn. Thousands of men, women and children braved the elements to let Queensland and the world know that the lives of babies matter, and that the destructive private member’s bill by MP Rob Pyne must be fiercely resisted.

I was just in Brisbane the past week and know how very hot and humid it has been. Sadly I had to fly back to Melbourne just before the march, otherwise I most certainly would have joined them. But it was great to hear firsthand reports about a very successful march indeed, especially given the very trying conditions.

However, the myths on offer by the pro-death camp were once again on full display for all the world to see, be they the ones found on posters by the counter-rally crowd, or in comments under news reports. Let me begin with Pyne’s bill very briefly.

Others have discussed it in detail already so I won’t repeat what has been said. See here for example: www.cherishlife.org.au/resources/media-releases/282-pyne-s-new-abortion-bill-a-con-job

Let me simply look at a few myths it entails, as discussed recently on the social media by Queensland prolifer Alex Todd. She just posted this:

Dear Mr Pyne,
Let’s talk ‘numbers’: 10,000 QLD babies are aborted every year, and in the last FEW years ONE COUPLE have faced court (and were not charged) and one minor needed court permission to seek an abortion.
MEANWHILE – the mums of those 10,000 (per year) now face higher risks of future miscarriage and preterm birth, of breast cancer and of psychological trauma (that isn’t always immediate) and THEY WERE NOT GIVEN THAT INFORMATION before their ‘medical procedure’. How about you look into the numbers and the details before you table any more potential legislation!!

Plenty of other myths abound here. Consider the Sydney Morning Herald story on this. It repeated plenty of lines from the noisy pro-abortionists (and there were only 20-25 present), compared to the several thousand peaceful pro-life marchers.

Of real interest are the comments under the article. There were 21 comments there when I wrote this piece, and every single one of them attacked the march and attacked life. Either our side was not sending in comments, or just as likely, the SMH was being rather selective in what comments were allowed in.

Many of the comments rehashed what was found on the placards of the pro-aborts. One featured in both places was this doozey: “If you do not believe in abortion then simply don’t have one”. Wow, do these people actually think about what they are saying?

One might as well say, “If you do not believe in murder then simply don’t do it”. Or, “If you do not believe in rape then simply don’t rape anyone”. Um, if something is wrong, it is wrong whether you personally do it or not. Those who believe that abortion is wrong, and is a type of murder, have every right to discuss this matter in public without these sorts of silly put-downs.

And one could turn this phrase around and say, “If you do not believe in prolife marches then simply don’t attend one.” But the pro-aborts think they are being so clever when they come up with this stuff.

Another silly myth being peddled yesterday at the march and in the media reports was this one: “My body, my choice.” Um, not quite. If it were your body, then you would be the one killed in an abortion. But it is not you who dies, but your baby. And of course if choice is such a terrific good, why not try extending choice to everyone, including the unborn baby? They sure do not get any choice in the matter. Why not?

Another comment under the SMH article claimed that the march was led only by “middle-aged white upper/middle-class men”. Doh! One simply has to look at the photos and see that there were indeed women included! And I happen to know personally the march organisers – they are mostly all women!

And what exactly does a person’s skin colour, age or economic position have to do with anything? If an important moral issue is being discussed – one that impacts every single one of us – then obviously everyone should be allowed to speak on the matter. Truth and falsehood, right and wrong, are not determined by one’s sex or age or class.

Another zany, myth-laden comment was this: “Religious nutbags with their crazy beliefs and invisible friends have NO business telling women what to do.” The number of logical fallacies found in this one comment could make for a great textbook on how not to reason.

The genetic fallacy is one – this is where you dismiss an argument based only on where it comes from, or the person holding it. The issue of abortion must be debated on its own merits, and not dismissed because of who are concerned about it. And another myth is the claim that only religious people are pro-life. There are actually plenty of secular pro-lifers out there.

And who had told anyone what to do? This entails at least three fallacies rolled into one: a non sequitur, a straw man, and a red herring. To march for life has nothing to do with forcing people to do something. Only the state can force people to do things. Pro-lifers simply raise their concerns in the public arena and hope for some honest debate.

Related to this is another very tired and foolish chant heard all the time: “Keep your rosaries off our ovaries”. As mentioned, plenty of non-religious people are staunchly pro-life. And while I am religious, I am not a Catholic, so I do not make use of rosaries. Again, if something is morally wrong – and murdering unborn babies is morally wrong – then the issue is not about one’s religious preferences, but in part how the state might deal with such an issue in law.

And another goofy comment – heard so often – was this: “When are the religious right going to get it through their thick heads the government voted in by the electorate run this country, not some mythical being.” What does that mean?

When is the secular left going to get it through their heads that in a democracy everyone is entitled to a point of view? Why should only their side get a hearing? And what does a wild charge of a theocracy have to do with anything? Of course we vote for people to represent us. Seeking those leaders who share our viewpoints is part of living in a free country.

And then we had one guy holding a sign that said “No uterus, no opinion”. Really! So does this guy have a uterus? Presumably not, so why is he even there? Based on what he is saying, why should we listen to his opinion? But as mentioned, rational, coherent thought is not a strong suit of these folks.

One last placard has to be mentioned. One gal in the small pro-abort crowd carried a sign – held upside down for some reason – with the words: “Trans inclusive always”. Um, what does the transgender debate have to do with abortion? Nothing directly of course, but this simply illustrates a truth we have long known: the same rent-a-crowd always keeps turning up to these things.

The same old socialist lefties, anarchists, and intolerance brigade members keep coming out to all these events. It does not matter what the particular issue is, all the usual suspects come out of the woodwork pushing the same radical left nonsense. But hey, it beats getting a job and working for a living I guess!

Plenty of other myths, furphies, and porkies could be mentioned here. You can see for yourself the loony comments under the SMH article. Suffice it to say that the pro-abortion side mainly runs on mythology, baseless accusations, mud-slinging, bumper-sticker clichés, and name calling. It sure does not bother dealing in fact, evidence and rational argumentation.

I was most surprised and most grateful that the Associated Press actually had the words “pro-life” in the title and body of their article on this. Most media outlets go with the usual “anti-choice” tag when covering such events. Even the SMH piece used the proper terminology to some extent. Miracles do happen, and maybe we are witnessing a slow shift in how a pro-abortion media is covering these stories. Time will tell if this trend continues.

17 Replies to “Out of Control Abortion Myths”