Seriously, has everyone lost their mind? Just a few short years ago nobody – except for a handful of radical sexual anarchists and androgynists – would ever have imagined that a guy could decide he no longer wants to be a guy, and simply will himself to be a girl. And worse yet, that he would demand the “right” to play as a female in female sports. 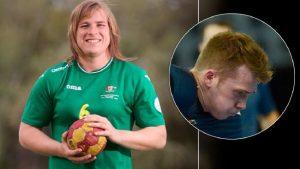 Until a few years ago one would have thought that it was sheer madness for a person to deny biology, deny reality, and even deny one’s DNA, and just decide to change one’s sex because one feels like it. This is the sort of stuff mental institutions would have previously dealt with.

And it is madness on the part of everyone else who actually assents to all this lunacy. It is both mad and dangerous. It is madness to agree with an anorexic young girl that she is way too fat and she needs to lose even more weight. Such “sympathy” could kill a person. There is nothing loving about that.

And it is the same with the trans madness sweeping the West over the past few years. And the most recent Australian case of this is beyond bizarre. It involves a big hefty guy who now thinks he is a girl and is demanding to play in woman’s footy. Yes, you heard that right.

Thankfully this time the normally politically correct AFL actually made a good decision. They said ‘no’. As one news item reports:

THE AFL has ignored Olympic guidelines by ruling transgender athlete Hannah Mouncey is too strong to play AFLW football. Just 20 hours before Mouncey, 27, was certain to be selected by a Victorian team at the AFLW draft an AFL panel ruled her ineligible.
Not only has she been allowed to play in the Canberra league, she has testosterone levels at just five per cent of the legal threshold for females. Mouncey on Tuesday night vowed to accept the AFL’s verdict and play AFLW in 2019 but it is not clear how she can prove her eligibility. A panel of AFL legal and medical experts considered her background, height and strength.
But the Herald Sun understands that their primary concern was the 190cm, 100kg ruckman was too physically dominant for the competition. The AFL was more worried about Mouncey using her size and strength to defeat opponents than any concern she might injure rivals.

Sadly, the reaction from the loony left was as predictable as it was pathetic. Many are calling this an outrage and are demanding that the decision be overturned. Plenty of legal cases will very likely soon emerge as we now demand the “right” for men to pretend they are women.

One opinion piece actually had this headline “AFL’s shameful fear of Hannah.” The commentator wrote: “Inclusion it seems is not for everyone and frankly that is a disgrace. It is a confusing and sad situation because Mouncey has basic human rights. You have to feel for her. She doesn’t want to be the face for transgender people. All she wants to do is play footy.”

Oh good grief. This guy is wrong in everything he said. Should I as an overweight senior citizen who has never played a game of footy in my life demand my “inclusion” and force the AFL to have me play? And a basic “human right”? Really? To play football? Since when? What UN document says that?

No, I do not feel for him. He is a bloke who has a mental disorder in thinking he is now a woman. He needs care and treatment, but no fake martyrdom status. He is NOT a victim. If he really wants to play footy, he can. He can play in the male league as a man – since that is what he is. End of story.

And if that sounds a bit strong, listen to the experts here. Dr. Paul R. McHugh is the former psychiatrist-in-chief for Johns Hopkins Hospital and its current Distinguished Service Professor of Psychiatry. He has said that transgenderism is a “mental disorder” that merits treatment, that sex change is “biologically impossible,” and that people who promote sexual reassignment surgery are collaborating with and promoting a mental disorder.

He is absolutely right. But sadly the Mouncey episode is just one of many. As I have written before, we have had female athletes who have actually been taken to hospital as a result of playing against men who pretend they are women. See this piece for example: billmuehlenberg.com/2017/03/20/equality-inequality-transgender-revolution/

Plenty of other sober-minded commentators have rightly bewailed the madness of letting males compete in female sports. This always penalises the women. And how exactly does this empower women? As Matt Walsh writes:

Please explain how this is all for their own good. After all, women cannot compete in women’s leagues if men are competing in women’s leagues. So, there will be no more women’s leagues. There will be men’s leagues and then cross dressing men’s leagues. I’m really hoping you can explain to my daughter and to all of our daughters how empowering it will be to witness the end of female athletic competition.
And, while you’re having this discussion, make sure you also explain how their silence and submission is, in this case, right and healthy. These girls are scared of speaking out and letting their feelings be known. They’re scared of saying they want their own leagues, and their own bathrooms, and their own identity. They’re scared of asserting their right to safety and privacy. But this is good, yes? Those bigots ought to be intimidated, right? They ought to just shut up and go along. Please tell them that. Please explain it. I don’t think they quite understand yet. Please, you pro-women folks, you women’s rights defenders, you protectors of female autonomy. Please come forward and lay it out clearly so everyone comprehends it. Say it just as it is, like this:
“No, girls, you don’t get your own bathrooms anymore. You don’t get your own leagues. You don’t get your own identity. Not if men want in. Shut up and let the man beat you. Let him take your gold medal. Let him disrobe in front of you. Let him do what he wants. You have no choice. The proclivities and fetishes of men must come first. The desire that you may have to retain and defend your own unique identity is transphobic. Shame on you. Your feelings are not legitimate.”

And another recent article offered this conclusion after looking in great detail at the hard evidence about male and female differences in sport:

Inequality of intelligence, Tocqueville writes, will always be with us. With apologies to Aristophanes, inequalities traceable to physical beauty and age are also hallmarks of human life. Such inequalities need not affect the principle of equal treatment and they add flavor to life.
Much the same can be said of sports. Sports are a vestige of the age of inequality. We celebrate and recognize excellence. We can identify the winners. We admire them for their excellence.
Teams with too much success—the Dukes, the Alabamas, the New England Patriots, the New York Yankees—are subject to a resentful, envious hatred. “Let someone else win” is a most democratic sentiment. Yet when these traditional powers play, we watch. Excellence fascinates us, and it brings out excellence in others. Nothing very important hangs on whether one team wins or another. We argue about it at the water cooler because, even in our democratic age, human beings admire excellence. Sports scream: “Some playing fields can’t be leveled. Some competitors are better than others!”
In this, sports speak the truth. There is no fine line between athletic accomplishments for women and men. Men are generally bigger, stronger, and faster. Where strength and speed and agility are the factors determining success, human beings watch men’s sports.
Sports bring out some of the differences between the sexes. Sports are valuable ballast in the American democratic regime. Would that we could acknowledge differences and celebrate them instead of burying them under a mountain of false hopes. Would that we could allow reality to govern our thoughts as they do our actions.
A sensible approach to equality in sports would be to acknowledge differences between men and women. Men are more interested in sports than women. Men are better at sports than women. We acknowledge the second reality through the very existence of women’s sports. We acknowledge the first reality in how we act.

Three cheers for reality – and biology. Three loud boos for political correctness which is killing women’s sport and may well result in some women being killed as well.