Australia will radically change if Labor wins the May 18 Federal election. This will be true in so many areas, but let me focus on just a few. A Labor victory will mean a massive win for all the radical social and sexual engineers and their hard-core policies. And it will also result in a massive loss for free speech, freedom of religion, and freedom of conscience.

Children will certainly be among the big losers, as will all of society. This will likely be the final nail in the coffin for the values most Australians still hold near and dear. Religious freedom will certainly take a direct hit, as will related freedoms such as free speech, the rights of religious bodies to teach their core values and beliefs, and so on. 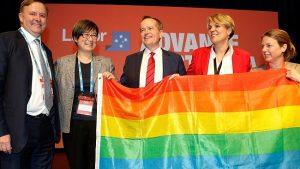 There are many ways one can document all this, but simply considering a recent website item will fully suffice here. One major homosexual and trans lobby group has been targeting the political parties, seeking to get them to fully fall in line with their radical agendas.

Equality Australia makes it perfectly clear that so-called marriage equality was NEVER something the militants would be happy with. They have always wanted and demanded much, much more. Simply turning to their homepage makes this perfectly clear: equalityaustralia.org.au/

This group has sent out a large questionnaire to the various political parties, seeking their responses to a number of questions. They have already received the Labor Party’s responses, and they are frightening indeed. Federal Labor was more than happy to answer the 18 questions of the questionnaire.

The answers provided make it absolutely clear that this Party is 100 per cent beholden to the radical social and sexual agendas of the militant homosexual and trans lobbies. They will fully do their bidding, no questions asked. There is no question that Labor is fully in bed with the radical activists.

Let me offer here parts of the replies given by Labor. Their opening words are worrying enough:

Thank you for the opportunity to present Labor’s position in response to the Equality Australia LGBTIQ election survey.

A Shorten Labor Government will deliver a fairer Australia for LGBTIQ people by tackling discrimination and giving a stronger voice to LGBTIQ Australians. These are all practical steps which take us further along the journey towards equality, providing a more inclusive and fairer Australia. Labor has a proud record of promoting and defending the rights of LGBTIQ people….

We were at the forefront of the struggle for marriage equality. After the Abbott-Turnbull-Morrison Government forced an expensive, unnecessary and harmful public vote on the country, Labor went all-out to campaign for the YES case. Labor’s support and parliamentary work was crucial to the survey outcome and the enactment of marriage equality in 2017.

While the changes to the Marriage Act were a giant step towards greater equality, it wasn’t the end of the road. People with diverse sexualities, gender identities and sex characteristics still face discrimination and structural impediments to full participation in society.

Given Labor’s record, the community is looking to Labor to continue to stand up for the rights of LGBTIQ people and their children. Labor is committed to working with the LGBTIQ community to continue to make Australia a fairer and more equitable society.

Consider the utterly frightening response given to Question Three:

….As it currently stands, LGBTIQ students and staff at religious schools risk being discriminated against, sacked or expelled. This state of affairs prompted a community outcry in late 2018, and Scott Morrison promised to tackle the protection of LGBTIQ students late last year. However, he failed to put a bill to Parliament that would deliver on this promise and he subsequently gave up.

Labor will not give up. A Shorten Labor Government will amend the Sex Discrimination Act to remove the exemptions that permit religious schools to discriminate against students and staff on the basis of their sexuality or gender identity….

Did you get that? Not only will religious schools be forced to take in any student with any sexual proclivity or leanings, they will also be forced to hire staff, teachers, principals and the like who also run the spectrum of various sexualities.

I have often warned about this. See just one such article: billmuehlenberg.com/2018/10/14/religious-freedom-not-for-religious-schools/

Equally shocking is Question Four and the Labor reply:

4. Will your party take a leadership role in tackling the harm caused by LGBT religious conversion therapy? For example, will your party raise the issue at inter-ministerial forums; improve regulation of counsellors and other health practitioners; ensure school chaplains are not engaging in conversion therapy; and regulate the publication of damaging conversion messages on radio and online?

A Shorten Labor Government will work with survivor groups and coordinate with the States and Territories to develop strategies for tackling this practice, including a nationwide ban on “Gay Conversion Therapy”. There is no place in modern Australia for this practice.

Once again, understand just what is being said here. If Labor wins the election, it will become illegal throughout the country for anyone – be they pastors or counsellors or youth workers or Sunday School teachers or Bible study leaders, etc – to give any help and counsel to those who struggle with same-sex attraction and are seeking relief.

These people will NOT be allowed to get the help and counsel they are so desperately seeking. And anyone who dares to give that help will be punished by the full force of the law. And given that the Bible itself is a book about transformation, and the ability of God to wonderfully turn around lives and lifestyles, how much longer before the Bible is banned under a Labor government?

This too I have often written about. See here for example: billmuehlenberg.com/2018/12/11/the-war-against-conversion-therapy/

And see this piece as well: billmuehlenberg.com/2019/02/04/victorian-nero-declares-war-on-christianity/

But wait, there’s more. Consider the matter of funding. Labor loves spending tax-payers’ money on all these militant lobby groups and their radical causes. That is perfectly clear in this Q&A:

9. How will you support and build the capacity of the LGBTIQ+ community including specific populations, Indigenous, multicultural and multi-faith LGBTIQ+ people? Will you introduce grants and funding opportunities for LGBTIQ+ (including population specific) community organisations?

Labor believes LGBTIQ organisations have a key role to play in supporting and ending discrimination against LGBTIQ people and their families. That’s why a Shorten Labor Government will commit $3 million in grants of up to $300,000 each over three years for capacity building, community cohesion and/or advocacy to LGBTIQ organisations….

We will also support Joy FM, Australia’s first and only LGBTIQ radio station, through a $600,000 grant for its ongoing operations. Labor will also provide $10 million to the ground-breaking Victorian Pride Centre – the first of its kind in Australia. The building will be home to ten proposed major residents: the Victorian AIDS Council, JOY 94.9 FM radio station, the Australian Lesbian and Gay Archives, Switchboard, Midsumma Festival, Melbourne Queer Film Festival, Minus 18, the Australian GLBTI Multi Cultural, Multi Faith Advocacy Group, and Team Melbourne, a peak organisation representing over 20 LGBTIQ sporting groups.

And of course the nation’s major display of nudity, debauchery and immorality will be fully and readily endorsed and supported by a Labor government:

10. Will your party provide funding and other support to Sydney Gay and Lesbian Mardi Gras to enable Australia to host World Pride in 2023, including funding support for their bid in October 2019?

In March 2019, Bill Shorten committed that if elected, he will be the first Australian Prime Minister to walk the full Mardi Gras March. Labor will work constructively with the Sydney Gay and Lesbian Mardi Gras on how to secure a successful bid.

One more issue: Labor is absolutely committed to the radical “Safe Schools” sorts of programs which are nothing but pro-homosexual and pro-trans propaganda fronts. They have made it clear that these programs will continue under Labor, complete with lavish taxpayer-funding:

18. Will your party commit to developing and supporting curriculum and programs in schools that are inclusive of LGBTIQ+ children and children from rainbow families?

Schools must be safe environments for students to learn and for teachers to teach – including same sex attracted, intersex and gender diverse students and teachers. Labor will continue working with teachers, students and schools to stop bullying and discrimination, ensuring a safe place for LGBTI students and children from rainbow families to learn by properly resourcing inclusion and anti-bullying programs and resources for teachers. Labor will continue to support national programs to address homophobia, biphobia, transphobia and anti -intersex prejudice in schools.

But you can read all their alarming responses for yourself: equalityaustralia.org.au/wp-content/uploads/2019/04/QSP0080-ALP-response-Rainbow-Votes.pdf

Make no mistake, a Shorten Labor government will be the most radical and subversive government Australia has ever seen. The entire Pandora’s Box of sexual radicalism and anarchy will be fully opened, impacting every Australian in shocking ways that we can now only imagine.

And this will be the death of freedom in Australia. Religious freedom will certainly be sacrificed at the altar of the radical sexual ideologies. Free speech, freedom of conscience, and the rights of small business, religious bodies, schools and so many others will be greatly curtailed.

This is Brave New World material – big time. Vote wisely my friends. Your very future depends on how we proceed on May 18.

44 Replies to “What a Labor Win Will Mean for Freedom, Religion, and Children in Australia”