Why is Australia Post – a government-owned business – forcing on Australians something that millions of people are fully against? Why are they using their monopoly powers in selling stamps to support and promote something that so many folks strongly disbelieve in and are greatly offended by? 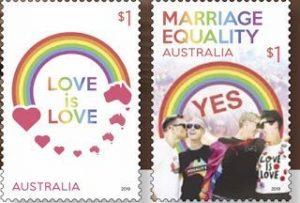 I thought that outfits like this were so much into diversity and tolerance – so why is it deliberately offending millions of people, and worse yet, forcing those who are offended to have to indirectly subsidise it as well? This is a slap in the face to millions of Australians, and none of us should put up with it.

I refer to two new $1 postage stamps that Australia Post will release from October 1-31. They both celebrate “marriage equality”. As the picture shows, we get the fake news “love is love” baloney featured on one of the stamps, and a big “yes” on the other, complete with homosexuals kissing – and of course the mandatory rainbows.

This is what the official September-October 2019 Stamp Bulletin says about this new release:

Marriage in Australia was legally defined as a union between a man and a woman in 2004. Same-sex unions were treated as de facto unions under federal law. These unions provided couples with most, though not all, of the legal rights of marriage, although those rights may be difficult to assert and were not always recognised in practice. A voluntary postal survey, designed to gauge support for same-sex marriage and the removal of legal discrimination was held between 12 September and 7 November 2017. The survey returned 7,817,247 (61.6%) “Yes” responses and 4,873,987 (38.4%) “No” responses. An additional 36,686 (0.3%) responses were unclear and the total turnout was 12,727,920 (79.5%). This important survey closed on 7 November 2017 and the results were released on 15 November 2017. Liberal senator Dean Smith introduced a historic marriage equality bill to the Australian parliament and senators from across the spectrum rose to endorse it just a day after the release of the survey results. Legislation to allow samesex marriage, the Marriage Amendment (Definition and Religious Freedoms) Act 2017, passed the Australian Parliament on 7 December 2017 and received royal assent from the Governor-General the following day. The law came into effect on 9 December, immediately recognising overseas same-sex marriages. The first same-sex wedding under Australian law was held on 15 December 2017. The stamp designs are celebratory, showing the highly recognisable rainbow colours and slogans synonymous with the Marriage Equality campaign. australiapostcollectables.com.au/content/dam/auspost_corp_microsites/collectables/documents/stamp-bulletins/2019/stamp-bulletin-361.pdf

“The stamp designs are celebratory.” Yeah, they sure are. Imagine if Australia Post tried to release postage stamps celebrating and promoting biblical Christianity. There would be a huge outcry from all the usual suspects: leftists, secularists, atheists, Muslims and so on. They would demand that Australia Post stop being so insensitive and so bigoted and so deliberately provocative.

And in an effort to fully represent ALL Australians, will Australia Post also be issuing a set of stamps honouring and acknowledging all those who voted against fake marriage? And to be really honest and fair, will they also issue some stamps celebrating all the divorces that have already taken place by homosexuals who “married” since the law change?

Or imagine stamps being released that celebrate the original marriage act in Australia that referred to marriage as the union of one man and one woman. Hey, that is as much a part of Australian history as the fake marriage campaign. When will Australia Post release stamps promoting what was always considered to be real marriage? Or are they worried it might offend some folks?

Yet here with this rainbow activism everything is just hunky-dory. ‘Let’s see how many Christians and others who voted against fake marriage we can offend.’ Since when is the Australia Post fully in bed with the activists, doing their bidding? Why do Australians have to have this propaganda rammed down their throats?

Some might say, “Well, I won’t be buying any of those stamps.” Good, but that is not enough. We need to bear in mind that Australia Post, as a government-owned corporation, has monopoly powers on letters and stamps, so all of us are still propping it up, at least indirectly. Thus it does not matter if you do not buy the stamps – we are still involved in the whole thing.

I suggest that all of you contact your local Federal Members and complain about this matter. You can find contact details here: www.aph.gov.au/Senators_and_Members/Parliamentarian_Search_Results?q=&mem=1&par=-1&gen=0&ps=0

“Nothing will change” the militants told us over and over again before the marriage vote. Yeah right – now you can barely post a letter without being subject to the activist’s propaganda. It just never stops. This is a deliberate attack by Australia Post on the fundamental values and beliefs of millions of Australians who voted no. Enough is enough.

40 Replies to “And Now Australia Post is Promoting Fake Marriage”