Today it is mandatory mask-wearing. What will it be tomorrow?

‘I can’t breathe!’ As of tomorrow that may well become true for some folks with Victoria’s latest tough lockdown measure being implemented: mandatory mask wearing – or a $200 fine. Many have already said they would rather pay the fine.

So how far will Andrews and his Labor government take this? Will the fines be raised to $1000, or to $10,000, if too many recalcitrants refuse to bend the knee? Will jail terms be next? Just what sort of draconian punishments will we see, all in the name of keeping us safe? 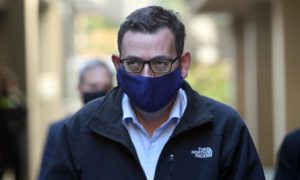 I have stated repeatedly that there certainly can be some measures taken by the state to protect the people in times of a public health crisis – but within limits. So let’s remind ourselves of a few basic truths. In terms of the notion of quarantine, the normal definition has always been this: “a state, period, or place of isolation in which people or animals that have arrived from elsewhere or been exposed to infectious or contagious disease are placed.”

Today plenty of governments are reversing this, as they quarantine perfectly healthy people. When healthy folks are so treated, we have moved from sensible health measures to statism and tyranny. The only thing more frightening than what so many governments are getting away with here is the sheeple themselves – the millions of submissive souls who question nothing and simply do whatever their benevolent overlords tell them to do.

In the 7 months that Covid-19 has so far been active, some 600,000 lives have been lost. Compare that with annual flu deaths, which we do have vaccines for. The World Health Organization says that “up to 650 000 people die of respiratory diseases linked to seasonal flu each year.” Yet the whole world does not go into lockdown every year to deal with influenza.

Getting back to mandatory masks, one friend on the social media asked what the problem is: if they offer just a one per cent improvement in our chances of being protected, then why not? Several things can be said. Scientists themselves keep differing massively on this matter, and some have even said masks might make things worse. See here for more on this: billmuehlenberg.com/2020/07/17/would-jesus-wear-a-face-mask/

Consider just one recent news item: “A Kentucky couple was fitted with ankle monitors and placed on house arrest after the wife tested positive for coronavirus but refused to sign self-quarantine documents.” fox6now.com/2020/07/19/kentucky-couple-fit-with-ankle-monitors-placed-on-house-arrest-for-refusing-to-sign-quarantine-documents/

Let me appeal to three other voices on this matter of mandatory mask wearing in particular, and Big Brother statism in general. One anonymous piece making the rounds on the social media raises some very good points:

That woman you shamed in the grocery store, because she wasn’t wearing a mask? She already feels enough shame because she was raped. Having something over her nose & mouth triggers her PTSD, and causes her to relive that trauma. That man at the Quickee Mart who you called selfish? He’s a volunteer firefighter, and just came from the ER, after being treated for smoke inhalation. He removed his air mask, in order to help a child breathe fresh air, instead of thick smoke.

That elderly lady who you screamed at to put a mask on, or shop when it’s her turn? Her husband of 60 years just passed away. She’s doing her best to learn to live alone. Every breath is physically painful, due to her grief. That little boy you lectured about removing his mask? He’s autistic. He doesn’t understand. He simply wants it off of his face.

That little girl who screams when somebody tries to mask her? She’s claustrophobic. She came from an abusive home, where she was confined to a closet. There are all sorts of reasons for not wearing a mask. Not all are lung, or immune system related. How many of you are among those shaming, name calling, and berating complete strangers, or worse, family members? How many of you are against bullying?

If you are among the first group, and align with the second, you may want to pump the brakes, and check yourself… you have become the bully you claim to be against. Wearing a mask does not make you a kind person. You are either a kind person, or you aren’t. A piece of cloth does not determine that trait.

On the flipside, not wearing a mask does not make a person selfish, or inconsiderate. It simply means that, there may be an unseen reason why they cannot wear one. You don’t know their story, and, to be quite honest, it’s none of your business.

Secondly, this from a piece in yesterday’s Australian:

The latest harbinger of doom is said to be the surge in infections in some US states and in Victoria, which typically are reported without context about the much younger age of those being infected and the collapse in death rates. At the same time as parts of an often weakened traditional media fight for attention, a shrieking social media has made it easier for biased stories to spread, and much harder for leaders to make the tough decisions they once would have. When any death becomes their fault in the court of public opinion, you can be sure the temptation to use other people’s money to try to stop it will be irresistible.

And God, or rather a declining faith in Him, may explain much as well. If a less religious population is more fearful of dying, it naturally wants to devote more resources to living longer. Indicators of religious belief are much lower now than during the last pandemics.

Rather, coronavirus restrictions, which have little or any scientific basis, have taken on a religious hue. Public health officials have become the high priests bringing down arbitrary rules, sometimes with little basis in science. Scientists have long debated the efficacy of lockdowns and masks, for instance, although you wouldn’t realise that from some of the media. Meanwhile, those who are increasingly being dubbed “Karens”, the sort of folk who centuries ago hunted out “witches”, gleefully shame those who don’t comply to the nth degree.

Since the pandemic erupted this year, understandably generating extreme fear that justified caution, the flow of analysis has largely been good. On every measure the virus has proved less lethal than first thought.

Keynes might have changed his mind with the facts but governments and their catastrophist cheer squad, typically in comfortable employment, unfortunately have not. The French prime minister this month ruled out another national lockdown in a “second wave”, citing the massive economic and social costs. Norway will not lockdown again as it did. It’s all too late now, and diagnosing the explanation offers little hope for a better response next time. www.theaustralian.com.au/commentary/look-were-pretty-safe-from-covid19-lets-not-kill-our-economy/news-story/175cf8ac22854008b7651b606b77f839

Lastly, the harm being done to our children because of corona alarmism and fear-mongering needs to be addressed. As one American mother explains:

The North Carolina governor has issued a decree that all students returning to school in the fall must wear a mask and social distance. This, despite the fact that 99.9 percent of children who get COVID don’t die from it and most don’t even have symptoms. Comparably, more children K–12 die from various other forms of the flu than from COVID, yet we are perpetuating a culture of fear among children in a form of politicized mass hysteria that treats COVID as if it were the Black Plague, which had a 100 percent mortality rate in its respiratory form across ALL demographics.

I have to ask, What are we doing to our children? Some would say we’re protecting them. Others would add that we’re protecting any vulnerable adults they might come in contact with—despite growing evidence that young children are not contagious because the virus does not hang onto them like it does older people. We are also getting more evidence that people are not as contagious when they’re asymptomatic, as once believed, which means that standard protocol for any sickness would be sufficient—stay at home if you’re sick or if you’re immuno-compromised.

Instead of using common sense, we’re covering our young children and enshrouding them in an environment of fear, all the while calling it “kindness to others.” This could have damaging long-term effects on our children that far outweigh any threat from COVID. Children are extremely vulnerable psychologically and emotionally, especially when their brains are still developing and behaviors imprint on neurological connections that can cause disruptions to normal development.

They are also in the tender years of developing socially, when they learn how to be both strong individuals yet responsible within a group, when they learn to be independent and distinct from the collective, yet aware of social responsibilities and relationships that interplay with their personal responsibilities and healthy self-interest. Yet, this panic over COVID is disrupting these stages of development and can have dangerous consequences for them as adults and for society at large.

Some might think forcing children to wear masks lies within that balance, but this is not the case given the context. Masks aren’t necessary to protect children—not in the case of COVID. Again, one death in a million doesn’t justify face coverings that generate false fear and trauma in children who should be learning to socialize properly, engage in a free educational environment, and enjoy the wonder of growing up while at the same time having a proper and healthy fear of what is REAL.

If we are going to follow the logic of forced COVID face coverings for children, we can’t deny the conclusion that they must be worn all the time, in every season, and forever. Again, more children die of the flu. You never know when a child might be exposed. If you’re wanting to save “just one,” then mandatory mask-wearing should be the state of existence from now on—for all time. The danger of deadly viruses is lurking around every corner.

If your thought is that children are protecting adults who are vulnerable, this can be handled by quarantining the very small number of vulnerable elderly who are at risk. This is a much wiser solution than masking children, separating them from their peers, creating emotional trauma, and generating a collective mindset that’s neither helpful nor healthy.

The best thing we can do for our children is to let them live their lives with all the risk that entails, educating them about the threats of life while still properly protecting them, empowering them to face death as part of life, and to teaching them to be sensitive to the feelings of others without becoming their slaves. romansone.com/editorial/what-are-we-doing-to-our-children

24 Replies to “Corona Alarmists: Get Your Knee Off My Neck”