If ever a time the phrase “Now the end begins” meant something, it is now. In a decision just as sinister, far-reaching and abominable as the 1973 Roe v Wade decision on abortion, the Supreme Court of the United States has just declared that reality and biology no longer exist, and we can now declare marriage to be whatever we want it to be. 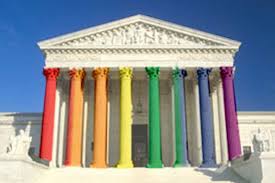 In a 5-4 decision, the unelected, unaccountable and irresponsible judges declared that the laws of all 50 states must now be struck down, and the decision of these five judges will now determine what marriage means. One report puts it this way:

The Supreme Court on Friday delivered an historic victory for gay rights, ruling 5-4 that the Constitution requires that same-sex couples be allowed to marry no matter where they live and that states may no longer reserve the right only for heterosexual couples.
The court’s action marks the culmination of an unprecedented upheaval in public opinion and the nation’s jurisprudence. Advocates called it the most pressing civil rights issue of modern times, while critics said the courts had sent the country into uncharted territory by changing the traditional definition of marriage.
“The court now holds that same-sex couples may exercise the fundamental right to marry. No longer may this liberty be denied to them,” Justice Anthony Kennedy wrote in the majority opinion. He was joined in the opinion by the court’s liberal Justices Ruth Bader Ginsburg, Stephen G. Breyer, Sonia Sotomayor and Elena Kagan.
All four of the court’s most conservative members—Chief Justice John G. Roberts Jr. and Justices Antonin Scalia, Clarence Thomas and Samuel A. Alito Jr.—dissented and each wrote separate opinions. Reading a dissent from the bench for the first time in his tenure, Roberts said, “This is a court, not a legislature.”

Judicial activism at its worst has once again struck America. Instead of allowing the American people to decide, five judges have decided for them, and have declared war on marriage, on God, on morality, on family, and on our children. Writing before this decision, Focus on the Family enumerated some of the direct consequences of this:

We will continue to see religious freedom taking a back seat to sexual freedom in many facets of society:
-Harms Children: Redefining marriage denies children of same-sex couples either a mother or a father. Decades of social science research has shown children do best when they’re raised in a home with their married mom and dad. Government policies should reflect the benefits of both a mom and a dad.
-Forced Closures: Faith-based adoption agencies are being forced to close their doors when faced with laws and mandates requiring them to violate their religious beliefs by placing children in homes with same-sex parents. This pressure will increase in the coming days.
-Legal/Public Challenges: Christian business owners – photographers, bakers, inn keepers, florists and others – who politely decline to use their talents and businesses to participate in same-sex ceremonies experience harassment, legal challenges and crippling fines.
-Parental Rights: Parents who want a say in what their young children are being taught in school about homosexuality have found legalized same-sex marriage is a “trump card,” which overrides their parental rights, leaving them no say in the matter.
-Tax-Exempt Status: Pastors and churches will face pressure to perform and celebrate same-sex marriages or face government retribution, such as the loss of tax-exempt status, or possibly be prosecuted for discrimination.
-Accrediting/Licensing: Private religious school accreditation, professional licenses and even employment criteria will increasingly require affirmation of homosexuality and same-sex marriage as a condition for approval.
-Counseling: There will be a continued push to ban counseling for teenagers who struggle with unwanted same-sex attractions, and who desire therapy to address this.
-Grant Exclusions: Faith-based charities that adhere to God’s design for sexuality, marriage and family will be excluded from government grants that help serve the poor and needy at home and abroad.
-Endangered Freedoms: Freedom of speech will become endangered as the government passes regulatory and even criminal laws punishing Christian views of marriage, deeming it as “hate speech” in any type of media, including radio, print, television, and the Web. This is already the case in Canada and the U.K.

This is just the beginning. This is a declaration of war by five judges who have spat in the face of their Creator, of marriage, of biology, and freedom. Now a major proper response for Christians and others is massive civil disobedience and defiance of this homo-fascist decision.

Whole libraries will soon be penned on all this. Let me cite a few authors who wrote before the decision, who knew full well what this would entail:

Alan Keyes: What purports to be a movement for so-called homosexual “rights” is in fact intended to discard, once and for all, the idea of God-endowed unalienable rights, inherent in the Creator’s information of all human beings (i.e., our human nature). The transcendent authority of “the laws of nature and of nature’s God” is the source or origin from which certain natural penchants or inclinations derive their special claim of right. Without reference to it, as the authoritative first principle of unalienable right, the logic of democratic, republican self-government collapses.
This is so because the “consent of the governed,” from which governments are supposed to derive their just powers (according to the organic law of the United States), has no lawful authority but what derives from the common exercise of right that informs it.

San Francisco Archbishop Salvatore Cordileone, chairman for the USCCB Subcommittee for the Promotion and Defense of Marriage: Regardless of what happens at the end of this month, nothing the court says can change what marriage truly is and we will continue to promote and defend it.
“Let the lie come into the world, let it even triumph. But not through me” [Aleksandr Solzhenitsyn]. The simple step of a courageous individual is not to take part in the lie. We may have to suffer this lie about marriage in the law, but we must not participate in it or keep silent about it.

Robert George: Now we face the prospect of yet another Dred Scott-type decision—this time on the question of marriage. I say that, not because same-sex relationships are the moral equivalent of slavery—they are not—but because five justices seem to be signaling that they will once again legislate from the bench by imposing, without constitutional warrant, their own beliefs about the nature and proper definition of marriage on the entire country.
If that happens, the Republican Party, the Republican Congress, and a future Republican President should regard and treat the decision just as the Republican Party, the Republican Congress, and the Republican President—Abraham Lincoln—regarded and treated the Dred Scott decision. They should, in other words, treat it as an anti-constitutional and illegitimate ruling in which the judiciary has attempted to usurp the authority of the people and their elected representatives. They should refuse to treat and regard it as a binding and settled matter. They should challenge it legislatively and give the Supreme Court every opportunity to reverse itself—especially as new justices fill vacancies. And they should work to fill vacancies on federal courts at all levels with jurists who reject judicial usurpation and can be counted on to respect the scope and limits of their own constitutionally specified authority.

Robert Reilly: The homosexual movement will not succeed in the long run. Dream worlds do not last. They invariably turn into nightmares from which people eventually wake themselves. How long that takes and how much damage it incurs in the meantime will depend partly on us.
Reflecting on his experiences in Nazi Germany where he had been imprisoned, Heinrich Rommen wrote: “When one of the relativist theories is made the basis of a totalitarian state, man is stirred to free himself from the pessimistic resignation that characterizes these relativist theories and to return to his principles.” We have the means at hand to return to this country’s first principles: they are called “the Laws of Nature and of Nature’s God.” We need them now as much as did our Founders. Let us return to them forthwith – before it is too late.

Much more can be said. I am still in shock – not surprised, but still stunned, in heavy grief, and crying out to God for his vindication. Now more than ever we need real men and women disciples of Jesus Christ. The time is over for playing games, for following our trivial pursuits, for living at ease in Zion.

Now we are fully involved in a war whether we like it or not. And those who do not join in, or think they can just sit on the fence, have already declared their true hand: they are part of the other side, and are not on the Lord’s side.

Get ready for increased persecution in America and all over the West. The nearly 200 cases of this that I documented in my latest book is only the beginning. Now the going starts getting real tough. This is warfare of the most serious sort.

Ultimately it is a spiritual battle, and the SCOTUS decision comes straight out of the very pits of hell. Onward Christian soldiers. We have no more time to waste. We must pray like never before. We must work like never before. And we must get on our faces before Almighty God and repent of our damnable apathy, carelessness and indifference which made all this possible in the first place.

God have mercy on America. Or, if needed, bring on your just judgment.

52 Replies to “SCOTUS Declares War on Marriage and Family”