I am just back from another terrific March for the Babies in Melbourne. Well done to all who came to stand up for babies and well done to the organisers who made it a big success, including Victorian MP Bernie Finn. And it was great to see so many friends, colleagues and co-workers there.

Around three or four thousand folks who are concerned about the slaughter of the unborn, and Victoria’s notorious abortion bill of 2008, came to the seventh annual march. Because of increasing security concerns (the pro-aborts can be quite nasty and violent), this year’s march was much shorter than normal. 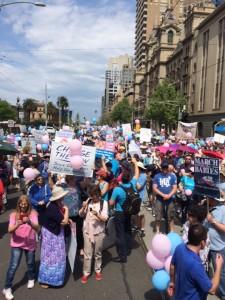 We again met at the Treasury Gardens, but instead of marching through the city we went straight to Parliament House just a few blocks away. There, with adequate police protection, we heard a number of terrific speakers, with the rally concluding not much over an hour from when it started.

The ferals (as they even like to call themselves) were certainly conspicuous by their absence this year. Only ten rather subdued and quiet protestors showed up, in marked contrast to the thousands of pro-baby champions. The only time I heard anything out of them was when Anna von Marburg got up to speak, and one of them screamed out (in a very loving and tolerant fashion), “Go f**k yourself Anna”.

Speaking of the speakers, Anna gave a terrific and inspiring word, recounting the successful work she and her team are doing in Albury to save lives and put pressure on the baby-killing machine. They have been doing a terrific job there, and are seeing the fruit of all their hard work. Well done Anna and Co.

Democratic Labour Party MP Rachel Carling-Jenkins also spoke very well indeed, and discussed her newly drafted private member’s bill which would curtail some aspects of our 2008 law. Given that the media will say almost nothing about the rest of the rally (no bloody confrontations, with most of the ferals likely up in Bendigo to counter the anti-mosque rally), they will have little to talk about except this announcement.

But the Melbourne Age has already run an article on this. They of course think it is a horrific idea and they are already bagging her suggestion. Their article says in part:

Under the proposal – announced at a pro-life rally in Melbourne on Saturday – women who are more than 20 weeks’ pregnant would not have the right to an abortion except in the case of a medical emergency. And doctors who carried out an abortion in breach of the new rules could face prosecution and jail terms up to 20 years.
“This protects women from the awful physical and mental consequences of late-term abortion and it protects children,” Dr Carling-Jenkins told the crowd at the annual March for the Babies rally at Parliament. “Women deserve better. Abortions don’t solve problems – they create them.”…
Dr Carling-Jenkins says she plans to introduce her bill – the Infant Viability Act – in the next sitting week of Parliament, which starts on October 20. However, fellow cross-bencher Fiona Patten, from the Sex Party, branded it “a stunt” and pointed out that the bill could not be debated until next year at the earliest.

March organiser Bernie Finn rallied the troops, urging them never to quit until we see babies fully protected in this state. He said: “We are not going to go away until we have a law that protects all people.” Several other speakers rounded out the brief but invigorating meeting in front of Parliament House.

Once again thanks must go to the Victorian police who did an excellent job this year as they did last year. Indeed, last year they were superlative, keeping the crowds of angry and hate-filled protestors away from the peaceful prolifers. Perhaps because of their successful actions last year that deterred the pro-aborts from turning up en masse this year.

As mentioned, I could only count 10 of these folks – all being the usual suspects from the Sex Party, the anarchists and socialists, etc. The usual rent-a-crowd in other words. So an absence of manic, screaming protestors plus a beautiful spring day made for a really terrific march.

Although much shorter than previous years, it was a stirring witness to the watching world that many of us will not stay silent while 20,000 innocent babies are killed every year in Victoria, part of the 100,000 butchered annually in Australia.

Let me conclude by singling out a few wonderful champions. While I continue to wonder why there are not tens of thousands of folks showing up for these marches (there would be at least 100,000 Christians alone in Melbourne), many great saints made heroic sacrifices to be there.

Many rural Victorians made the long trip to be in attendance, but let me highlight three champions from interstate who were determined to get there this year. Rissa from NSW made great sacrifices to come, and it was great to catch up with her. She is a superstar.

And two gals came all the way from Perth: Eleanor and Emily. Emily left her family behind but did bring one of her very young children with her. Now that is commitment. Now that is dedication. Now that is sacrifice. All for the sake of the unborn. I salute these three young female warriors for life!

Of course some regulars also make the long trek over, such as Daniel and his family who come each year from Brisbane. All these folks deserve our greatest praise and honour. Zillions of folks in Melbourne could not even be bothered to turn up to an event like this, yet these heroes made great sacrifices to do so.

I thank them and all the thousands of others who did march today. And I will see you again next year!

I just saw the 6pm news reports: Ch. 7 said a large police turnout greeted the pro-lifers! Um no, the police presence was there to protect the prolifers from the rabid pro-aborts, as we saw the need for in previous years! And Ch. 9 spoke about a “crusade” and said “hundreds” of prolifers were there. Um no, there where thousands there. Typical lamestream media baloney.

13 Replies to “Another Successful March for the Babies”