Yesterday I wrote an article featuring a hard core leftist and Democrat Party operative carrying on, with a straight face, about how gender is purely whatever we want it to be. He fully seemed to believe this. See the link below where you can watch him in action. It was scary as all get out. I am still shocked by it all.

He would say things like this over and over again, apparently accepting every word of it: “Your gender identity determines your gender, period.” He actually believed this was somehow in accord with reality. That was the really frightening thing about the short clip. 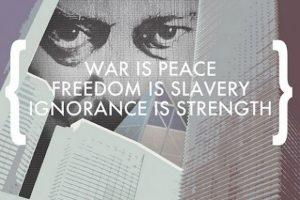 How can one manage to get so far from reality that they can talk absolute gibberish and think they are somehow carrying on a rational discussion? And there are so many other folks like this guy. They have been fed on secular left ideology for decades, and are walking, talking reservoirs of Political Correctness.

It is this spooky ability of folks to believe a lie, or complete nonsense, that I want to explore here. We all know about those who have clearly taken leave of their senses – people who are no longer living in the real world. In the past those who thought they were God or suffered from other grandiose delusions were locked up. Mental illness is one cause of people living in unreal worlds and believing utter nonsense.

Other things can bring this about. Coercion for example can result in people saying things they may not actually believe. And hard-core coercion can even make people believe certain things they once knew to be false. Statism has long tried to fully control people – including their very minds.

George Orwell’s classic dystopian novel Nineteen Eighty-Four was modelled on one such totalitarian hellhole: the Stalinist Soviet Union. So his book features horrific and coercive mind-control activities carried out by the State. In one memorable scene from the book the hero, Winston Smith, is being tortured by O’Brien of the Thought Police to cure him of his “insanity”.

He endures a few weeks of this, as O’Brien tells him that reality is whatever the Party says it is. Consider this harrowing account:

‘You believe that reality is something objective, external, existing in its own right. You also believe that the nature of reality is self-evident. When you delude yourself into thinking that you see something, you assume that everyone else sees the same thing as you. But I tell you, Winston, that reality is not external. Reality exists in the human mind, and nowhere else. Not in the individual mind, which can make mistakes, and in any case soon perishes: only in the mind of the Party, which is collective and immortal. Whatever the Party holds to be the truth, is truth. It is impossible to see reality except by looking through the eyes of the Party. That is the fact that you have got to relearn, Winston. It needs an act of self-destruction, an effort of the will. You must humble yourself before you can become sane.’

He paused for a few moments, as though to allow what he had been saying to sink in.

‘Do you remember,’ he went on, ‘writing in your diary, “Freedom is the freedom to say that two plus two make four”?’

O’Brien held up his left hand, its back towards Winston, with the thumb hidden and the four fingers extended.

‘How many fingers am I holding up, Winston?’

‘And if the party says that it is not four but five – then how many?’

The word ended in a gasp of pain. The needle of the dial had shot up to fifty-five. The sweat had sprung out all over Winston’s body. The air tore into his lungs and issued again in deep groans which even by clenching his teeth he could not stop. O’Brien watched him, the four fingers still extended. He drew back the lever. This time the pain was only slightly eased.

The needle went up to sixty.

The needle must have risen again, but he did not look at it. The heavy, stern face and the four fingers filled his vision. The fingers stood up before his eyes like pillars, enormous, blurry, and seeming to vibrate, but unmistakably four.

‘No, Winston, that is no use. You are lying. You still think there are four. How many fingers, please?’

‘Four! Five! Four! Anything you like. Only stop it, stop the pain!’

Abruptly he was sitting up with O’Brien’s arm round his shoulders. He had perhaps lost consciousness for a few seconds. The bonds that had held his body down were loosened. He felt very cold, he was shaking uncontrollably, his teeth were chattering, the tears were rolling down his cheeks. For a moment he clung to O’Brien like a baby, curiously comforted by the heavy arm round his shoulders. He had the feeling that O’Brien was his protector, that the pain was something that came from outside, from some other source, and that it was O’Brien who would save him from it.

‘You are a slow learner, Winston,’ said O’Brien gently.

Earlier on in the novel we read this:

In the end the Party would announce that two and two made five, and you would have to believe it. It was inevitable that they should make that claim sooner or later: the logic of their position demanded it. Not merely the validity of experience, but the very existence of external reality, was tacitly denied by their philosophy. The heresy of heresies was common sense. And what was terrifying was not that they would kill you for thinking otherwise, but that they might be right. For, after all, how do we know that two and two make four? Or that the force of gravity works? Or that the past is unchangeable? If both the past and the external world exist only in the mind, and if the mind itself is controllable – what then?

Let me repeat a short portion of that: “Not merely the validity of experience, but the very existence of external reality, was tacitly denied by their philosophy. The heresy of heresies was common sense.” As I mentioned, the State insisted that reality is whatever the Party wants it to be.

Now go back to the Democrat I mentioned in the video who seems to actually believe that gender is whatever you decide it is. How is he any different from the poor victims of the State in 1984? Sure, he may not have come to this completely false belief because of torture and coercion, but he surely came to it because of exposure to decades of indoctrination, propaganda, Political Correctness and radical sexual agendas.

He has come to believe a lie, and it seems he will fight to the death to defend his flight from reality. This sure does frighten me. As has been noted, books like 1984 were meant to be read as warnings to us, not as instruction manuals.

But this is not all that can be said about the matter. Because I am a Christian, I must also speak about the spiritual realities which underlie all this. As with most things in life, we see three key players involved: there is God who is working out his plans and purposes; there is Satan who is seeking to thwart and hinder God and his work; and there are humans, who can make choices for good or ill.

Thus we have people who have a huge tendency to fall into deception, including self-deception. In a fallen world we are all too ready to believe a lie – many lies. Standing behind this is the malevolent spiritual being who exists to deceive us. Indeed, he is known as the deceiver.

But standing behind all this is Almighty God who is on the throne, and interacting with the other two main players. Of course God is the ultimate player here, and how all three interact is a matter of mystery in many respects. But let me close by looking at three New Testament passages which are quite relevant to the wholesale embrace of lies and illusion that we see all around us.

In Romans 1:18-32 we read about those who shake their fist at God, living in gross immorality and rebellion. Because of this, three times it says “God gave them over”. We also read that “Although they claimed to be wise, they became fools” and that “They exchanged the truth about God for a lie”. Not a bad description of what we see happening all around us in the West today.

Also, as Paul says in 2 Corinthians 4:4: “The god of this age has blinded the minds of unbelievers”. Well that sure explains things then. Satan is alive and well, turning the minds of those who refuse to bow to the one true God to mush.

The deception is palpable. And note how once again a rejection of the truth is tied in to delighting in evil. They go together. This explains to a very great extent the astonishing degree of people saying and believing things that are patently untrue, and even fighting for these lies to the bitter end.

While we can seek to reason with these people and share truth with them, and try to rebut their moronic beliefs, there is also a spiritual battle going on. So the Christian must engage on both levels. The cultural, political and ideological battles we are fighting are but a subset of the greater spiritual, cosmic battles.

To be effective in these conflicts we must be involved at every level.

9 Replies to “Flights From Reality – How People Believe a Lie”