What are we to make of the Chick-fil-A decision on who it donates to?

Plenty of ink has already been spilled on the seeming capitulation of the Christian-owned chicken restaurant chain. While the company and some of its Christian supporters are trying to put a good spin on their decision to stop charitable giving to groups that are holding the line on homosexuality, it does not look too good.

It seems business considerations have trumped Christian principles. Devout Christian Dan Cathy had upset homosexuals and the left when he made it clear back in 2012 that homosexual marriage was not on: “I think we are inviting God’s judgment on our nation when we shake our fist at him and say, ‘We know better than you as to what constitutes a marriage.’ And I pray God’s mercy on our generation that has such a prideful, arrogant attitude to think that we have the audacity to define what marriage is about.” 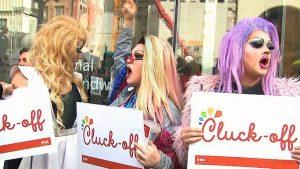 All hell broke loose following those remarks, with boycotts and major campaigns launched against CFA. Christians on the other hand strongly supported them, and their business continued to thrive. But now it seems all this is being undone. Again, there are some conflicting reports here, but it does not look good. Consider just a few things.

One interview with the President of CFA included this: “‘As Chick-fil-A expands globally and into more liberal parts of the U.S., the chicken chain plans to change which charities it donates to after years of bad press and protests from the LGBT community,’ Bisnow reported Monday.” www.dailywire.com/news/report-chick-fil-a-to-stop-donating-to-christian-charities-branded-anti-lgbt

And when homosexual groups welcome such changes, you know there is trouble: “GLAAD said people should ‘greet the announcement with cautious optimism,’ but argues that the restaurant’s shift does not go far enough to appease LGBT advocates, calling on Chick-fil-A to change its workplace policies to be more LGBT-friendly as well as publicly disavow its ‘anti-LGBTQ reputation’.” www.disrn.com/2019/11/19/glaad-says-chick-fil-a-donation-shift-not-enough-company-needs-to-unequivocally-speak-out-against-anti-lgbtq-reputation/

Moreover, who is now getting the charitable gifts? Sexuality expert Robert Gagnon quotes a friend on the social media:

And now we know who is replacing The Salvation Army, Fellowship of Christian Athletes, and the evangelical ministry Paul Anderson Youth Home on Chick-fil-A’s charity list: pro-gay Covenant House…. Covenant House is openly LGBTQ-affirming. Not just “tolerating.” AFFIRMING. It has gay board members and the entire organization–every chapter–went through a “True Colors” assessment to make sure every chapter would not only understand the plight of gay youth, but AFFIRM “their authentic self.” Covenant House proudly participated in the NYC Pride Parade. This is who Chick-fil-A is replacing The Salvation Army with. A ministry that openly affirms sinful behavior and rejects the biblical worldview on sexuality.

It does seem to boil down to a business decision. One pro-homosexual report puts it this way:

As the company tries to open up in new places like from the Bay Area to the UK (and draws negative attention in the process), its image undoubtedly needed a little rehabilitation to reassure people that, actually, it doesn’t hate the gays anymore. That said, Chick-fil-A is still headed up by ultra-devout Southern Baptist Dan Cathy, who pushed the anti-gay agenda, and there’s little evidence to suggest that he’s changed his views. Rather, he’s just learned to keep his mouth shut. So, even if Chick-fil-A isn’t supporting anti-gay charities anymore, customers who eat there are still supporting Cathy. www.eater.com/2019/11/18/20970565/chick-fil-a-charity-donations-covenant-house-junior-achievement

And we should know by now that trying to appease the militants never works. They are never satisfied, as I just wrote recently: billmuehlenberg.com/2019/11/13/the-activists-are-never-satisfied/

Many Christian leaders are quite concerned about this turn of events. Rod Dreher wrote:

So, let me get this straight: Chick-fil-A has managed to become the third-biggest fast-food chain in the US, despite earning so much progressive hatred for honoring what its leadership once claimed was fidelity to “a much higher calling.” But now, in 2019, as it sits near the summit of business success, Chick-fil-A suddenly finds that it can no longer afford to follow that “higher calling,” and is cutting the Salvation Army and the Fellowship of Christian Athletes off.

I love Chick-fil-A, but it’s going to be a while before I go there again. This is nothing but gutless surrender. And it’s a lesson to all of us. The LGBT lobby, and their progressive allies, will never, ever leave you alone. Never. You watch: within five years, Chick-fil-A will be embracing woke advertising campaigns. Just this morning, I was looking across the breakfast table at my kids’ cereal box, saw this rainbow, and wondered why Honey Nut Cheerios had gone gay. www.theamericanconservative.com/dreher/chick-fil-a-surrenders-to-lgbt-bullies/

This capitulation will not stop the bleeding, because there was no bleeding. Now that might change. This move is much more likely to alienate Chick-fil-A’s supporters than to appease its critics. Surrendering to political correctness almost never pays off, and Chick-fil-A isn’t likely to be an exception. Personally, I don’t care what charities a chicken restaurant does or does not support. That is their affair and their decision to make. I am not going to boycott. Their chicken sandwiches are still delicious, which is my primary concern when I’m in the drive-thru. But it is disappointing and somewhat bewildering to see them cave like this. Their refusal, until now, was important for reasons that have nothing to do with gay marriage or homosexuality. It was good to have at least one major company with the stones to defy the Rage Mob. Regardless of the reason for the defiance, or the issue at the center of the controversy, the defiance itself was the point. Their surrender, on the other hand, has no point.

This is what Chick-fil-A will now learn the hard way, as have so many before them: You cannot appease the mob. It doesn’t matter if you give them what they want. It doesn’t matter if you fall to your feet, confess your sins, and beg forgiveness. All your self-abdication will do is empower and encourage your critics. They will not forgive you (not that Chick-fil-A needed forgiveness). This is an age of scalp-claiming, not mercy. Now they will happily take yours, celebrate the victory, and move on to the next target. You aren’t their friend now, or their ally. You’re just a trophy on their shelf. Congratulations, Chick-fil-A. Oh well. Popeyes is better anyway. www.dailywire.com/news/walsh-chick-fil-a-just-caved-to-the-rage-mob-theyre-about-to-learn-the-hard-way-that-surrendering-never-pays-off

And ex-homosexual Joe Dallas has penned a great piece on this. He said in part:

The company wants to be clear about who they are. Fair enough. But then, exactly who have they been claiming to be? As noted by Kaylee McGhee of the Washington Examiner, the Chick-fil-A Mission Statement reads: “This company exists to glorify God by being a faithful steward of all that is entrusted to us.”

If glorifying God is your mission, and you want to be clear about who you are, then withdrawing your support from others who glorify God, simply because they uphold the standards of the God both you and they glorify, seems inconsistent and (forgive me) a little chicken….

If the company hadn’t supported the organizations it’s now abandoned, there’d be no issue. But when you openly support someone, then announce your withdrawal of support citing, among other things, a wish not to be associated with an anti-gay position, then you’ve done some pretty
strong messaging.

To the companies you’ve cut off, you’ve said, “You’re great, but your position on sex and family makes you dangerous to be seen with.”

To the Christians who’ve supported you largely because of your stand, you’ve said, “You’re great, but you’re expendable. We know you’ll be mad, but you won’t disrupt our business, you won’t demand that universities and airports ban us, and you won’t stage sit-ins at our locations. So it’s safer to offend you than to offend them, because your reaction will never be like theirs, and you’re more likely to forgive us than they’ll ever be.”

To the social/political juggernaut known as the LGBTQ movement, you’ve said, “Bullying works. If you target Christian groups, harassing them at every turn, they will eventually cave to your demands. It worked on us. Now go do it to the others, and it will work on them, too.” joedallas.com/2019/11/19/chic-fil-a-and-this-present-world/

I had wanted to write about how Western Christians proceed in ever-darker times, where one business, one service, one corporation and one industry after another succumbs to radical leftism, and often -anti-Christian policies and beliefs.

However, this piece is getting too long already, so I will make that an article on its own. But things are getting worse by the day. We certainly expect secular companies and businesses to push pro-homosexual and other activist agendas. But when Christian business seem to be caving in as well, that really is a genuine concern.

At the very least, keep Cathy and CFA in your prayers. And there is a petition you can sign on this as well: lifepetitions.com/petition/petition-tell-chick-fil-a-to-reverse-course-don-t-cave-into-anti-christian-lgbt-agenda

24 Replies to “Chick-fil-A, Christianity and Compromise”