Good citizenship should not turn into blind support for the state:

In my discussions about the trade-off between virus containment and lockdown measures, I keep getting folks who seem to think that the state can do no wrong. They have this rather naïve belief that whatever the state is doing (including the full lockdown of nations and the economic devastation this is causing) is only always good and proper, and we should just meekly submit.

They actually get rather upset when I continue to ask some necessary questions and try to hold the government accountable. They seem to think that I am being treasonous or rebellious or not concerned about human life. That last furphy is the worst of the lot, and I have dealt with it repeatedly now. 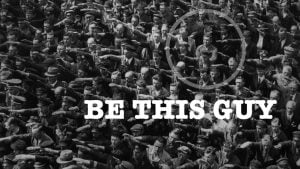 And many of these folks have actually questioned my Christian credentials. A number of them have pointed to a text like Romans 13, as if it is the only passage in the Bible on our relationship to the state, or that it means we must always blindly accept whatever the state says and does.

I have already penned a lengthy piece on how Romans 13:1-7 should be understood, so I strongly urge my readers to take a look at what I said there: billmuehlenberg.com/2014/12/03/difficult-bible-passages-romans-131-7/

And I keep having these folks telling me – or implying – that we should just accept that the state knows best, that it is wise and benevolent, and that it always has our best interests at heart. They also keep telling me that we should err on the side of caution here, and fully go along with the various austere lockdown measures.

Um, when “caution” means disproportionate powers being given to the state, economies devastated, individual freedoms increasingly smothered, overzealous policing, no clear sunset clauses in place, and the cure being worse than the disease, then there is nothing cautious about this at all.

Just consider the economic costs. In the US over 22 million people have now lost their jobs because of the lockdown. Consider just one shocking headline: “Less Than Half Of Adults In Los Angeles Now Have Jobs.” www.dailywire.com/news/less-than-half-of-adults-in-los-angeles-now-have-jobs

Here in Australia the situation is also becoming more and more gloomy each day. Because of the government lockdown nearly a million Australians have lost their jobs. In Victoria things are going from bad to worse. One headline said this: “Only two new virus cases as bleak state of economy revealed”.

The article says this: “Grim forecasts show Victoria’s economic output is predicted to plummet by $32 billion over the next six months, plunging the value of the average Melbourne house and sending unemployment soaring in one of the worst crises in the state’s history.” It also speaks of 270,000 Victorian jobs being lost.

Yet some of the corona alarmists dismiss all of this. They will actually say, ‘Don’t worry, the economy will always bounce back. People before profits.’ Baloney, it may be years or decades for all this to be resolved – if ever. As I keep saying, economic devastation is just as costly and can cause just as many fatalities.

And those who seem to think that the state is always benign and that it can never abuse its powers clearly have no understanding of history whatsoever. As I also keep saying, I am not sure what worries me the most: the complete and utter ease and speed in which states are locking down entire nations, or the complete unquestioning acceptance of all this by the masses of people.

Not only do such folks have little or no understanding of history, but they have little understanding of the Bible as well. The truth is, both history and Scripture give us good reason for always maintaining a healthy suspicion of concentrated power, and of the necessity of routinely questioning the state.

Indeed, both give credence to the notion that at times civil disobedience may be required as well. I have looked at this topic often, eg: www.billmuehlenberg.com/2008/11/02/christians-and-civil-disobedience/

But let me take it even further. Many Christians have also asked if there ever can be a place for such a thing as a just revolution. I have looked at that question in some detail in a two-part article:

The American Founding Fathers on revolution and resistance to tyranny

Let me expand upon this a bit, mainly by looking at the formation of the nation I hail from: the US. America of course was the product of revolution. And the Founding Fathers and most early Christian pastors and leaders back then fully supported this.

This is not the place to go into a lengthy discussion of the history and politics of this. But offering a few representative quotes might be of interest, especially given that so many Americans right now are holding protests against the stringent lockdown policies and the economic devastation they are experiencing. Here is just a small sampling of what these early Americans had to say:

“Resistance to tyranny becomes the Christian and social duty of each individual. … Continue steadfast and, with a proper sense of your dependence on God, nobly defend those rights which heaven gave, and no man ought to take from us.” John Hancock (First Signer of the Declaration of Independence)

“When the government violates the people’s rights, insurrection is, for the people and for each portion of the people, the most sacred of the rights and the most indispensable of duties.” Marquis de Lafayette (French-born American military commander during Revolutionary War)

“The tree of liberty must be refreshed from time to time with the blood of patriots and tyrants.” Thomas Jefferson

“The spirit of resistance to government is so valuable on certain occasions, that I wish it to be always kept alive. It will often be exercised when wrong, but better so than not to be exercised at all. I like a little rebellion now and then.”  Thomas Jefferson (from a letter to Abigail Adams, February 27, 1787)

“The strongest reason for the people to retain the right to keep and bear arms is, as a last resort, to protect themselves against tyranny in government.” Thomas Jefferson

“…no civil rulers are to be obeyed when they enjoin things that are inconsistent with the commands of God…. All commands running counter to the declared will of the Supreme Legislator of heaven and earth are null and void, and therefore disobedience to them is a duty, not a crime.” Jonathan Mayhew (Boston minister, 1749)

“Give me liberty or give me death.” Patrick Henry (from a speech given at Saint John’s Church in Richmond, Virginia on March 23, 1775)

In sharing these quotes I of course am not seeking to be seditious here, nor am I being cavalier. I am NOT saying Western nations are now ripe for revolution with all the mass lockdowns so many countries are experiencing. I am NOT saying anything about it is time for armed uprisings and the like.

I have always said that some government measures are quite justified to deal with a crisis like this. Some restrictions on liberty are needed. But it is not historically or biblically amiss to at least think about and talk about when states may have gone too far, and when the citizens have a right and a duty to challenge the state in various ways.

At the very least, we should be asking hard questions and not remain like mere docile sheep. I happen to support the various protests now happening in American cities over this lengthy lockdown. I think they have every right to be worried about their lives and their futures.

So once again, I will keep asking questions, I will keep holding my leaders to account, and I will keep speaking about how all lives matter – be they from the virus crisis or the economic crisis.

18 Replies to “Corona: My Government Right or Wrong?”