It is now official. Diabolical madness and PC lunacy rule at the highest levels of Western culture. We all suffer as a result, and it all seems to just get worse each new day. Examples are unending of the sexual anarchists and coercive utopians forcing their moonbeam agendas onto the rest of us.

By now you would have heard how the IOC has jumped on board the looney tunes bandwagon, insisting that men can be women and can compete with women in sporting competitions. As one news report states: 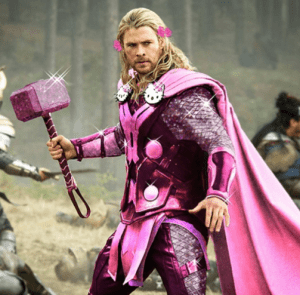 Transgender athletes should be allowed to compete in the Olympics and other international events without undergoing sex reassignment surgery, according to new guidelines adopted by the IOC. International Olympic Committee medical officials said on Sunday they changed the policy to adapt to current scientific, social and legal attitudes on transgender issues.
The guidelines are designed as recommendations – not rules or regulations – for international sports federations and other bodies to follow and should apply for this year’s Olympics in Rio de Janeiro. “I don’t think many federations have rules on defining eligibility of transgender individuals,” IOC medical director Dr Richard Budgett said. “This should give them the confidence and stimulus to put these rules in place.”
Under the previous IOC guidelines, approved in 2003, athletes who transitioned from male to female or vice versa were required to have reassignment surgery followed by at least two years of hormone therapy in order to be eligible to compete. Now, surgery will no longer be required, with female-to-male transgender athletes eligible to take part in men’s competitions “without restriction”.

I have written often before about all this bogus transgender politics. As Margaret Hagen, Professor of Psychological and Brain Sciences at Boston University states, “Transgenderism Has No Basis in Science or Law”. Her entire article is a must read, but let me cite her concluding words:

Let us be clear: there is no such thing as “sex-reassignment” surgery. A mutilated male pumped full of estrogen remains just that—a mutilated male pumped full of estrogen. He has not “transitioned” into being a woman. He can never be a woman. Nor are the hundreds of thousands of women who have undergone total hysterectomies for various reasons transformed into males. They remain women whose ovaries and wombs have been removed. They are not men….
Up until the very recent past, reality testing was a fundamental component of psychotherapy. The opposite approach is irrational and indefensible. Indeed, one prominent psychiatrist in this field has termed this accommodation “collaborating with madness.” That is what American society is being asked to do by people who are well-meaning but profoundly confused about the realities of transgenderism.
We expect our legislators to have rational bases for the laws they enact. We expect our judges to have rational bases for the decisions they reach. Even amid political pandering by those seeking reelection, we expect at least a veneer of rationality in the exercise of legislative and judicial powers. There is simply no rational basis for the laws being proposed and imposed in the realm of transgenderism. There is very little knowledge at all—no common definitions of terms, no accepted methodology, no outcome analyses, no testing and rejecting of hypotheses, no agreed-upon standards, no science. There currently exists no reliable foundation for making these laws that will shape the actions of the larger community as they relate to sexually nonconforming individuals.
Laws that restrict our freedoms and direct our actions should never be passed without a clear definition of the interests and parties to be affected and a precise explication of the ways the laws will serve those interests. At present, we have no such definitions or explanations. Put the brakes on transgender lawmaking until we do.

But back to the IOC lunacy. Bob Unruh wrote about this craziness this way:

Early in Barack Obama’s Oval Office tenure, WND columnist Les Kinsolving wrote of a decision by the Maine Human Rights Commission to back away from a requirement that schools allow men who identify as women to join women’s teams. A commissioner who supported shelving the plan called it a “victory for common sense and sound reasoning on a very controversial issue.”
“How long will most female athletic teams last if they’re all open to males?” Kinsolving asked at the time.
The world is about to find out, with the International Olympic Committee announcing it will allow transgenders in virtually all athletic competitions without undergoing reassignment surgery. That means men competing against women in various sporting events.
“They ought to make good boxers and power lifters,” commented Jim Hoft at The Gateway Pundit.
WND Vice President David Kupelian, author of “The Snapping of the American Mind,” said the issue ultimately is fairness.
“A few years ago, Americans were shocked when the first transgender bathroom measures were being discussed, and the idea that men could use the ladies’ room was shocking,” he said. “Once the shock subsided and the leftist lawyers and legislators forced implementation, they aimed for a higher bar – forcing girls to accept boys in their locker rooms and showers, as long as the boys claimed they identified as female,” he said.
“But with the International Olympic Committee’s ruling that men claiming to be women can compete against woman athletes, a new world record in insanity and unfairness has been established,” he said….
Perhaps a harbinger of Olympic events to come, a male-to-female transgender mixed martial arts fighter, Fallon Fox, defeated opponent Tamikka Brents by dishing out a damaged orbital bone and a concussion. The badly injured Brents commented, “I’ve never felt so overpowered ever in my life.”

Yep, expect to see plenty more of that. Steve McConkey of 4 WINDS has been fighting this stuff for years. As one write-up explains:

In 2003, the IOC allowed transgenders to compete after sex reassignment surgery and two years of hormone therapy. With the new rules, no reassignment surgery is necessary, and athletes have to receive only one year of hormone therapy. 4 WINDS, a sports ministry in Madison, Wisconsin that stands up worldwide for Christian athletes, was the only sports ministry to fight the 2003 transgender ruling. 4 WINDS knew this would open a door for immorality and create an uneven playing field in the future.
“We started in 2003 standing against transgenders in the Olympics,” states 4 WINDS president Steve McConkey. “Not only is the LGBT movement promoting immoral behavior in sports, but science will show that the new IOC ruling is not scientifically sound. The IOC has opened the door for a threat to the Olympics worse than performance-enhancing drugs.”
In recent years, 4 WINDS has opposed the LGBT movement influencing sports. The IOC, USOC, NCAA and other sport organizations have pushed for the acceptance of homosexuality in sports. In February 2015, Steve McConkey opposed Bruce Jenner’s decision to become a transgender. He knew the media and sports organizations would use his celebrity status to promote the transgender movement.

Finally, Douglas Wilson offers a bit of common sense to all this insanity:

The johnnies in charge of this insist they are going to keep everything “fair” and “equitable,” to which a wizened sage in the mountains once replied, “yeah, right.” They strive to maintain their pretense by saying that male athletes striving to compete (penis and all) with the ladies must have their testosterone levels “below 10 nanomols [sic] per liter for at least 12 months before competing,” and “that the testosterone level must remain below this while competing.”
They must do this via hormone treatments! You male athletes out there! You must take hormones! Not you girls born that way! Not you! You may not take hormones! In short, the guys must engage in a form of doping to get down to 9.8 nanomoles while the ladies may not do anything to get up to 9.8 nanomoles. How many court cases do you think it will take before somebody finds out how arbitrary it all is? And when they discover how arbitrary, inconsistent, and stupid it all is, does anyone seriously think that they will resolve the inconsistency by kicking the guys back to the other locker room? Ha….
In short, the entire field of women’s athletics is now wide open to every male “also ran” in the world. Gee, I wonder if any of those guys might be brittle enough, insecure enough, vain enough, competitive enough, conceited enough . . .
Now if you are a simple mechanic living in Des Moines, or a welder making your living in Phoenix, or perhaps a sawmill hand in western Montana, I want to bring you in on something that you all more than halfway suspected already. And that is the glaring fact that the people running the world are fools.
Now many of them, no doubt, did well on their GREs. The tachometer in their little red convertible of a brain can bounce nicely at the right side of the dial. But that does not change the fact that they are barreling down the wrong road late at night, a dark and stormy night actually, and the bridge right up ahead of them is out. Once they launch the whole red operation off the end of that collapsed bridge, the tachometer, such as it is, become largely irrelevant. One does not glance at it any more. One has somehow lost interest.
So we are not talking about IQ. In Scripture folly is a moral category, not an intellectual one. But even with that important qualification made, folly as a moral category can still get pretty stupid, and there comes a time when the only possible answer is that of a horse laugh.
Begin with the premise that nobody knows what a girl is, reason validly from that point on, and you can soon find yourself neck deep in twaddle. The bubbles you see around you are being blown from the bottom by the medical chiefs of the International Olympic Committee. Start with the assumption that gender is a social construct, apply the rules rigorously, and when you next look around, you may come to the crucial realization that all the important people are moonbat crazy. Assume with all the cool kids that your grandparents’ sexual mores were infra dig (as the kids say today) and terminally unhip, and the end results will be dottier than a three-day festival of dalmatian owners.

BTW, the pic I have used to adorn this article comes from Wilson’s site, and he has these words appended to it: “Meet Tiffany, silver medalist in the 2016 hammer throw. Her teammates call her Bruno, but not when she is around.”