You would have read about the FBI reopening its case against the crooked Hillary. Of course there has been an ongoing investigation which she has managed to dodge, evade and pretend is no biggee. The latest revelations in today’s press may be too late to impact on November 8, but we can always hope some sanity – and some justice – nonetheless prevails.

Here is how one news report opens on this breaking story: 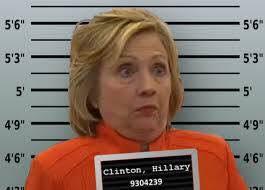 The Federal Bureau of Investigation (FBI) has reopened its investigation into Hillary Clinton’s use of a private email system as secretary of state after finding new evidence on seized devices belonging to Anthony Weiner and his wife Huma Abedin, according to Fox News. Donald Trump called the stunning announcement “bigger than Watergate”, and Clinton appeared blindsided by the news, declining to mention it during a rally in Iowa just 11 days out of the election.
Fox News reports an FBI source confirmed that the new emails were discovered after the bureau seized devices belonging to Weiner, a former member of Congress and mayoral candidate, and Abedin, a top Clinton aide who recently announced she was separating from her husband….
FBI Director James Comey confirmed the bureau was investigating new emails related to Clinton.
“In previous congressional testimony, I referred to the fact that the Federal Bureau of Investigation had completed its investigation of former Secretary Clinton’s personal email server. Due to recent developments, I am writing to supplement my previous testimony,” Mr Comey wrote.

As mentioned, this is a ray of hope that finally some investigations really will get to the truth of this crooked and perverse politician. The FBI blew it big time by earlier finding plenty amiss with Hillary, but not doing anything about it. But we will have to wait and see how this pans out. Matt Walsh offers some brief commentary on this:

In the meantime, all we need to know is this: The Democratic nominee for president is under an active FBI investigation. All reports indicate that she will still be under investigation when the election is held on Nov. 8. Liberals now must decide, then, if they want to be the first voters ever in history to cast their ballots for a suspected felon. Will they debase themselves and their nation by putting a woman into the White House even as the FBI has yet to decide whether she actually belongs in prison?
I suspect they will, without much hesitation. But if they’re going to make a disgrace and a mockery of our entire political system by electing Hillary Clinton, they certainly lose the right to lecture Trump voters in the process. It’s no secret that I am not a Trump fan, but I can’t stomach the Clinton voters who pretend to be traveling on the morally superior route. Your candidate is under investigation by the FBI, for God’s sake. This has never happened in the two-and-a-half centuries of our nation’s existence. Electing her would be a historic low point. The kind of thing our grandkids will read about and shake their heads in confusion.
Here’s the deal: You can’t complain about injustice while you vote for a woman who would already be in jail if she had a different last name, or at least a different letter next to her last name. You can’t complain about “inequality” while you further that inequality by supporting an elitist crook who has been placed so conspicuously above the law. You can’t scream about Trump “undermining our democratic system” while you help a blatant criminal rise to the top of it. And you absolutely cannot ever again speak about the rule of law, because the rule of law dies with Hillary’s inauguration. And you will have played a part in making that happen.
Maybe that’s something you should stop and think about.

So we will have to see just what comes of this. But let me deal with one other issue that crops up so often in this election cycle.

On a related front, one of the more foolish things the AlwaysTrump camp throws around at me and others – and they do say heaps of foolish and nutty things – is that we are not attacking Hillary like we do Trump. Um, that is simply ludicrous and false, for plenty of reasons.

I just did a quick search of my site, and I have over a hundred articles in which I discuss the Clintons, with at least half of them about Hillary. And articles on Obama number well over 350. So I for one have always been writing about how bad the Clinton–Obama axis of evil is.

And of course the case for NeverHillary is easily made. See just these five articles for a full rundown of her many evil ways and dangers:

I have shared these before, and they are still well worth sharing far and wide at this late stage in the election cycle.

But there are still a few very simple reasons why I have been more outspoken about the other New York liberal. First, the bulk of my readership is comprised of Christians and conservatives. Thus the overwhelming majority of people I am interacting with and writing for would never even think about voting for Clinton. So there is no need to beat a dead horse in this regard.

Also, the Republican Party is in theory supposed to represent the conservative side of politics, of which I am a part. Thus one would think that they would actually run with a conservative and a Republican. Instead, they have run with a longstanding liberal, Democrat supporter, and buddy of the Clintons.

Um, why in the world should I vote for a guy like that? If I wanted to vote for a lefty Democrat, I would have run with Hillary. That is why I have so often written about the fraud Trump. He is destroying the GOP, trashing the conservative brand, and is helping to bring down a country I love.

Hillary was never supposed to represent me or my party or my values or my beliefs or my principles or my politics or my ideology. So of course NeverHillary. That is a no-brainer. But here we have a guy who is claiming to represent all that when he most certainly does not. So this wolf in sheep’s clothing is just as anathema to me – if not more so – as the wolf not pretending to be anything other than a wolf.

Once, again, you can vote for whoever you want. Go for it. I will think and act according to my deeply held biblical values and beliefs. I will not throw out my values and principles for crass political expediency. If that gets you outraged, that is your problem, not mine. Here I stand, I can do no other.

God have mercy on America.

13 Replies to “The FBI and Clinton: Too Little Too Late?”