What was that word again? You know the one: it starts with “h” and ends with “ypocrisy”. If there was any one term that perfectly describes the left, it would be this one. How many times have I pointed out their blatant double standards?

This is simply the gift that keeps on giving. Every time a leftist opens his or her mouth, you are almost guaranteed of another colossal example of hypocrisy. But before I highlight the latest cringeworthy example of such blatant hypocrisy, let me offer a brief historical and etymological lesson. 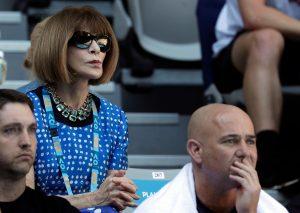 As some of you might know, our English word “hypocrite” actually goes way back to the world of ancient Greek theatre. The old Greek word hypokrites, means “actor” or “stage player.” Greek actors wore masks as they took on different roles.

Related to this is the phrase “two-faced”. It refers to a person who is insincere or puts on an act. It again ties in with the notion of double standards and hypocrisy. While most folks at times can be two-faced and hypocritical, it seems that those on the left have turned this into an art form.

Let me present to you another perfect example of this rank hypocrisy. And it seems in this case that the hypocrisy is clearly in vogue. The editor-in-chief of US Vogue, Anna Wintour, is in Melbourne lecturing us about intolerance in tennis, of all things.

I must confess that I never heard of this big cheese, highfalutin British-American until now. But here she is down under, preaching to us about intolerance. Here, in typical Sydney Morning Herald fashion, is how they open with the story:

Anna Wintour has thrown her support behind the push to rename Margaret Court Arena over the tennis champion’s opposition to same-sex marriage. “I find that it is inconsistent with the sport for Margaret Court’s name to be on a stadium that does so much to bring all people together across their differences,” the US Vogue editor-in-chief said in a speech delivered at the Australian Open Inspirational Series in Melbourne on Thursday, to applause.

“This much I think is clear to anyone who understands the spirit and the joy of the game. Intolerance has no place in tennis.” Wintour went on to say that, although Court was “a champion on the court” a “meeting point of players of all nations, preferences and backgrounds should celebrate somebody who was a champion off the court as well”.

Court, a one-time tennis great turned Christian minister, has said the legalisation of same-sex marriage in Australia raised alarming issues for Australia, controversially describing homosexuality as “all the devil” in 2017. Martina Navratilova has joined calls for Margaret Court Arena in Melbourne to be renamed after Aussie tennis great Margaret Court said she would boycott Qantas due to the airline’s stance on same-sex marriage.

Wintour, who is in Australia for the first time, also expressed her views on Prime Minister Scott Morrison, and notably his previous ambiguity regarding proposals to amend the Sex Discrimination Act such as to allow religious schools to expel LGBT students. (Morrison has since said schools should not be able to discriminate against students based on sexuality.) “I have been alarmed by your prime minister’s record on LGBTQ rights, which seems backward in all senses,” she said.
www.smh.com.au/lifestyle/fashion/intolerance-has-no-place-in-tennis-wintour-criticises-margaret-court-20190124-p50tcs.html?fbclid=IwAR2JqzmXSyBmAFIO-pquLxibg__nZnFCsWDZLnprk2n9fXUGDf4uqD5-VuE

OK, let me see if I got this straight. A visiting Yank, speaking at a tennis function, solemnly assures us that we can NOT have any intolerance in the world of tennis, all the while showing just how intolerant she is of a certain tennis player. OK, I think I got that.

‘Intolerance MUST be stamped out, and we will begin by showing full-scale intolerance to those we differ with.’ Right, I see how that works. In the name of tolerance let us become as intolerant as we can possibly be, because we are of course ‘in the right’.

Mounting the high horse and showing your moral superiority while engaging in gross hypocrisy is such a hallmark of the left. This is their signature dish. This is what they do. That is their trademark. And the only thing more ugly than this appalling hypocrisy is their complete unawareness of it.

They are seemingly oblivious to their own despicable double standards. On a scale of 1 to 10, their ability to see the stench of their own duplicity and phoniness is around -13. No wonder average Australians and Americans have had a gutful of these frauds.

No wonder most folks are fed up with these fakes and their fake news, their fake outrage, their fake moralising, and their fake posturing. Enough already. Ms Wintour likely knows absolutely nothing about Margaret Court. She wants ‘somebody who is a champion off the court as well’.

Well I can think of no greater champ than Margaret. While many former tennis stars are simply living the good life now, and looking after Number 1, Court has devoted her life to helping others. As but one example, in 1999 she and her church opened the Margaret Court Community Outreach. This is a small part of what it does:

MCCO food hampers are one of our largest requests for assistance, with 24 tonnes of fresh, frozen, perishable and non perishable food items going out per week. These food donations are made by various companies around Perth such as IGA, British Sausages, National Foods and Dobra Garden Trust. We give away over 3,000 meals per week and since commencement, to date we have given away over 900,000 meals.

It sure sounds to me like she is a champion off the courts. Just how much is Ms Wintour doing for the poor, the homeless, the drug addicts, etc? Yet because Court has the audacity to believe what nearly everyone in human history has believed – that marriage is between a man and a woman – she is now the devil incarnate, and we have to hear mega-hypocrites like Wintour building herself up while tearing Margaret down.

I would not doubt that the Perth pastor does more good for more people in a month than this uppity New York bigwig has done in a lifetime. So spare us the lectures lady. They reek of your ugly arrogance and duplicity. And why not try learning about what real tolerance actually looks like?

How does that old saying go? If it wasn’t for the left’s double standards, they wouldn’t have any standards at all.

20 Replies to “The Leftist Disease of Double Standards”