It really is time to go Dan:

OK, time for me to vent. But here we go again: hapless and helpless Victorians who have already suffered so very much under Dan Andrews and his utter inability to govern are now under their third lockdown – THIRD lockdown – in less than a year. Supposedly it lasts for another five days, but I will not be surprised if he keeps on extending it and extending it. He absolutely loves doing that. 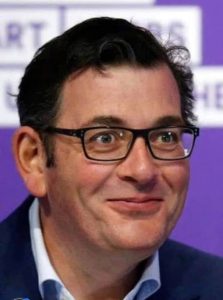 So here we have it once more: he has shut down the entire state, further destroyed the economy, destroyed many more jobs, destroyed more lives because of more mental health problems, depression and suicides, all because of a tiny handful of cases of the Rona that he could not manage in quarantine. Andrews is clearly the most useless, bumbling and clueless leader in the nation.

The demonic lust for power seems to utterly drive some of these tinpot dictators mad. This guy really is a complete maniac. Only a few days ago this shocking shyster was telling us Victoria leads the way in handling quarantine and the virus, yet now we are in our THIRD lockdown!! How can anybody take this guy seriously?

Everything about this latest lockdown stinks to high heaven. We have one of the busiest weekends of the year where countless small businesses had hoped to do so well, and make up for all the losses they endured last year. We have both Valentines Day and the Chinese New Year. But now we are all prisoners yet again because of this inept and disastrous Premier.

Countless businesses had bookings and reservations and plans for parties and weddings and meals and special events, etc. Caterers, venues, chefs, and florists etc., have all been thrown to the wolves with no warning. These small business owners are at breaking point and are spitting chips at this latest act of madness.

Most of the restaurateurs and food caterers and events organisers had ordered tonnes of fresh foods ahead of time to be used on this very special weekend, but now it is too late to even donate it to various charitable causes. So it will all go to waste – millions of dollars of it.

And how in the world does Dan get away with causing millions more people to be out of work with so many small businesses closing down for good, yet he tells us that multimillionaire tennis players are “essential workers” and will keep on playing?! PLEASE explain to me Dan how they are “essential workers” while the rest of us are imprisoned once again!?

But of course all the groupies and zombies who slavishly love, worship and adore Andrews can be found all over the mainstream media such as the Age, the ABC, Twitter, etc., singing his praises. Why do I suspect that if Andrews told them to sacrifice their newborns for the good of the cause – or because that is the ‘best health advice he received’ – these sheeple would readily and gladly do it?

Thankfully not everyone has been lobotomised and mesmerised by this tyrant. I tuned into 3AW for a short while this afternoon and boy, basically all of the folks calling in were mad as hell. They are utterly ticked off at how this guy just makes things up as he goes along. They know of course that he and all his public servant buddies will do just fine thanks.

They will ALWAYS have their cushy guaranteed taxpayer-funded salaries coming in. They could stay home for years and not worry about a thing. Their pay cheques are guaranteed. But all those in the private sector who are struggling so greatly, who are losing their jobs, who are seeing their businesses fold up, who are struggling to feed their families are getting zippo from Dan. He could not care less about them, and does not even seem to know they exist.

But these ordinary mums and dads and workers and rate payers and struggling business owners were just livid. You should have heard how angry they were at this ruthless overlord who does not give a crap about them. They are mad as all get out, and so am I to be honest.

Yep, I sure ain’t happy! On top of all the other madness here in Danistan’s hell-hole, I went to Coles to get a few groceries this afternoon. They already have limits on how many cans of beans you can buy, etc. I said, “Um, stage 4 lockdown does not start till midnight!” I was told their computers already had these restrictions in place and she could not change it! Good grief.

And here is the worst thing of all: When Dictator Dan says we are shut down for 5 days, you can be almost guaranteed that he means 5 weeks or 5 months. He really is a corrupt, power-drunk tyrant who never wants to relinquish power. Recall that he said he wants to extend our state of emergency to the end of the year – 11 more months! He really does want to be dictator for life.

Millions of Victorians will be so very badly impacted by all this. Even other states will again feel the impact, with yet more border closures occurring. I heard of one poor bloke from interstate who was booked to stay in a Victorian hotel tonight, but if he does, he has to sit there for the five days. He cannot move, along with the rest of all of us – except for Dan and the other bigwigs.

The event he came for is now a wipe out, he is a long way from home, and he will not get any of his money back. He loses no matter what he does. And there would be tens of thousands of other horror stories just like this. We will be hearing many more such stories in the days ahead.

And I am not exempt. A son of mine was meant to go to Sydney next week to complete his studies. So now he had to drop everything, quickly pack, get in the car, and try to make it across the border tonight before the wall of steel once again descends upon us – just like the good old days in Communist East Berlin.

EVERYONE suffers because of this – everyone, except Dan and his mates. They are having a great old time. He loves all the attention and limelight. He loves getting in front of the cameras every single day rambling on and on. But the rest of us are going through hell. Thanks Dan.

Thankfully many people are utterly fed up with this incompetent, disaster-prone thug of a leader. Victorian Liberal MP Bernie Finn said this:

As a Victorian, my heart is very heavy tonight. My thoughts are especially with those couples who WERE going to be married tomorrow – some whose weddings have been blocked for the second or third time. My heart breaks for small business operators, particularly florists, hoteliers and restauranteurs who prepared for what should be the biggest weekend of the year but instead face bankruptcy. Daniel Andrews has much to answer for but really has only two things left to do: apologise and resign!

And whether any good will come of it, we also had the Victorian Opposition Leader Michael O’Brien speaking out about this. He said in part:

Victorians have got every right to be absolutely furious with the Andrews Labor Government. This government stuffed up hotel quarantine again, this government mismanaged contact tracing again and this government let the virus into our community again.

This government is now making Victorians pay for their mistakes by locking us up for a third time. It is just not good enough. Victorians don’t expect magic or miracles. They just expect competence from their State Government and they haven’t seen it. Why is this only happening in Victoria? Why is this the third time we are going into lockdown?

I feel so much for every Victorian who is hurting at the moment, for those people whose plans have been thrown out the window. The brides and grooms who are planning to get married this weekend, those planning to celebrate Valentine’s Day, and the small businesses that were planning to open their doors and create jobs.

All of these people are being hit between the eyes because of Labor’s third lockdown. We were promised by the Andrews Labor Government that they had learned the lessons of last time. We were promised that hotel quarantine would not let the virus escape again. This clearly was just more Labor spin.

Yes Andrews is an expert at spin, at obfuscation, at blaming everyone else and never taking any responsibility for all the mistakes he has made and all the misery he has caused – including the more than 800 people who died as a direct result of his complete incompetence and ineptitude.

Sorry, but I really cannot stomach this Premier. If his complete mishandling of the virus was his only fault, that would be sufficient to see him tossed out of office immediately and permanently. But add to this all his diabolical agenda items – his pro-death and anti-life policies, his pro-radical sexuality and anti-family policies, his pro-secular left and anti-Christian policies and practices, and you really do have the worst, most diabolical, Premier in Australia – perhaps the worst ever.

As a believer, I will keep praying for him. I will pray that he is either improved or removed. I hope he is convicted of his sin, repents, and turns his life over to Christ. If not, I hope he is swiftly and judiciously removed from office. For the sake of all the suffering Victorians who really cannot take it anymore, the sooner he goes the better.

22 Replies to “Andrews Again – And We ALL Suffer”