More on the madness that is Danistan:

My cat – appropriately named ‘Possum’ – has been carrying on pretty much as normal, even though we are under our THIRD lockdown in a year. Hmm, what happened to that ‘two weeks to flatten the curve’? Possum is going through business as usual. Yes, her humans may be around a bit more, but otherwise, things continue as normal. 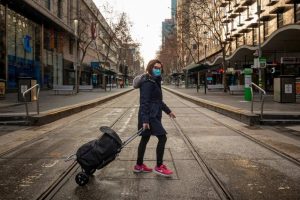 Lockdowns may be fine if you are a cat – but of course I am not a cat. Neither are 6.5 million other Victorians. We are designed to be communal, to be with others, to be in the fresh air, to work, to provide for our families, and so on. But all these basic rights have been stolen away from us – once again – by The Dictator.

A handful of people in downtown Melbourne get the Rona and our power-drunk ruler locks down the entire state. People living in Woop Woop lightyears away from Melbourne’s CBD are also prisoners in their own homes. What sort of madman does stuff like this?

The research on just how ineffective and counterproductive such lockdowns are has been shared often by me and others, so I will not here recount all that. But the idiocy of it all is just mindboggling. Recall that Dan has told us that multimillionaire tennis players are “essential workers: and must be allowed to play, while the rest of us poor sods stay in our home concentration camps. I like this making the rounds on the social media: “For the record, I now identify as a professional tennis player.”

The poorest and the youngest are the worst affected by lockdowns of course. Small business owners are struggling massively as are children and young people. Suicides and mental health problems are all skyrocketing. Plenty of scientific and medical experts have slammed our flawed lockdown and quarantine programs.

Most recently Australian Medical Association WA president Dr Andrew Miller has spoken of these failures both in Perth and in Victoria. See his interview with Alan Jones for example: www.skynews.com.au/details/_6232312736001

Many others have spoken out. As to the wealthy doing well, while the rest suffer, Patrick Carroll speaks of the poor and marginalised and immigrants who especially suffer:

Champions of the lockdowns tend to be especially oblivious to these hardships, and their preoccupation with case numbers and COVID deaths has caused them to blithely dismiss people’s concerns. Some have even castigated protesters for raising their concerns, brushing them off with the callous retort, “it’s not all about you.”

Another way people have trivialized these hardships is with the phrase “just stay home.” To many, that slogan may seem innocuous. But, for those living on the margin, that word “just” cuts like a knife. The fact is that for a myriad of reasons, many of them simply can’t afford to stay home, and talking as if they can only underscores the extent of our shortsightedness.

In many cases, the myopia displayed by the most vocal proponents of the lockdowns likely stems from the fact that they themselves have not been impacted nearly as much as those who are underprivileged. Politicians like to say “we’re all in this together,” but in reality, there isn’t really much “we” about it. fee.org/articles/lockdowns-come-from-a-place-of-privilege/

And liberty matters – for all people. Joe Boot notes how the lockdown mania has become a new religion:

Whilst fear and the exploitation of fear have surely contributed to the surrender and evaporation of life-giving freedoms, fear of disease alone is not an adequate explanation. In recent months, a kind of moral orthodoxy has built up around Covid-19 mitigation with a religious fervour to match, bringing with it a sense of universal obligation to surrender….

The moralisation of these measures cannot happen in a vacuum, however. We do not elevate political policy to an almost sacred level without a world-and-life-view informing and undergirding the process. Even amongst some Christians there has been a disconcerting failure to appreciate the wider implications of what is happening and a worrying absence of desire to analyse the conceptual prejudices of the emerging political landscape. When the majority of a political class and general population displays a stubborn unwillingness to confront its assumptions, that culture is already in serious trouble. The brilliant Jewish philosopher Hannah Arendt, whose family fled Nazi Germany, has noted that one characteristic of a culture at risk of endorsing acts of evil is, ‘not stupidity but a curious, quite authentic inability to think.’ christianconcern.com/resource/christian-liberty-versus-lockdownism/

As but one sad and scary example of this very thing, I just had someone who claims to be a Christian actually say this to me: “God tells us to obey the laws of the land. Anyone who does not is deliberately sinning. These COVID rules are put in place for our safety.”

Good grief. I replied by saying that these rules are often put in place for control and power by corrupt leaders. I said her faith in fallen and power-hungry leaders was touching but unbiblical. The state is NOT absolute, and we sin against God when we put the state ahead of God and his will. I suggested she read this piece for starters: billmuehlenberg.com/2020/05/15/the-state-is-not-absolute/

She replied by saying the state was doing the right thing with these lockdowns. I said that plenty of medical and scientific experts fully agree that the Andrews lockdowns are ineffective and counterproductive. I also said she may need to work on her biblical knowledge: the biblical data on saying NO to the state when it oversteps its authority is plentiful and quite clear. One can start with Acts 5:29. I said she could see more:

the fundamental duty of all citizens to protest against the laws of the state if those laws are unenforceable, illegal, ridiculous, created without reasonable consultation, destructive to society, or are otherwise a breach of international standards to which the nation is a signatory. In this case, the act of civil disobedience is not against the nation, but rather in defence of it against those who have abused the laws of the state. It is an act of preservation, not destruction.

Most Covid laws have been created without community consultation, and fall outside what regular citizens understood the limit of government power to be.

It was never expected when politicians were elected, particularly in a country like Australia, that a state premier could waltz out in front of the camera one morning and decide to shut businesses down for a year. With freedom of movement between states protected by the most fundamental of our legal documents, the notion that suddenly families and businesses in different states are cut off from each other has quite rightly caused outrage.

The legality of these mandates is questionable while their harm is undeniable. They were not taken to election and where they conflict with the Constitution, no referendum has been held. While a team of lawyers might be convinced to uphold the medical mandates with an intricate scaffolding of fine print, that does not mean that they are ethical or within the spirit of the legal structure. www.spectator.com.au/2021/02/the-new-necessity-for-civil-disobedience/

And various Australians have been so rightly incensed over this new tyranny that they have already undertaken acts of civil disobedience. Most recently we had Melbourne pastor Paul Furlong of the Christian Revival Church in Narre Warren holding his Sunday morning church service, despite the latest Andrews’ lockdown madness. As a result, the police showed up.

As one report put it: “‘Are we going to obey God? Or are we going to obey man?’ The organisers were allowed to finish the service, but details were taken and the people who attended could face a $1652 fine. Pastor Paul could face incitement charges and Victoria Police confirmed the investigation was underway.” 7news.com.au/lifestyle/health-wellbeing/victorian-pastor-paul-furlong-defies-stage-4-lockdown-and-holds-service-in-narre-warren-c-2165166

I know Paul, and he is the real deal. Please pray for Paul. He is one of the few pastors in all of Victoria who has the courage to stand up for his Christian beliefs, even if it means paying a heavy price for doing so. Most Christian leaders here would never dream of rocking the boat.

Let me finish with a few more thoughts. There is something that gives me some hope and excitement: when I hear folks like Peta Credlin, Andrew Bolt, Alan Jones, Rowan Dean and Paul Murray on Sky News tear into the immoral, fabricating, arrogant and incompetent Dan Andrews.

Why? Because my God is a God of justice. He hates injustice, and he hates it when proud and powerful elites treat ordinary folks in despicable and unjust ways. All of Scripture speaks about God’s passion for justice and righteousness, and his abhorrence of injustice and unrighteousness. And Andrews is the perfect example of this.

If most Christian leaders refuse to open their cowardly mouths to speak out against this injustice, then God will use pagans like these to speak truth to power. That gives me hope. And yes, I have often chewed out these same folks for being weak as water on key things like abortion, homosexuality, etc. But many of them have been good on standing up to The Dictator so I will give credit where it is due. See more on this here: billmuehlenberg.com/2020/12/16/the-death-of-conservatism-in-australia/

Lastly, speaking of Peta Credlin, she has been absolutely terrific in holding Andrews to account. Given how weak almost all Victorian state opposition leaders are, I would love to see her taking over here in Victoria. I made that case yesterday on the social media.

And today I see that others have similar thoughts. Corrine Barraclough just wrote, “Peta for Premier”. She concludes her piece this way:

The idea is not without merit. The blokes who run the Victorian Liberal Party have barely put a dent in Daniel Andrews, despite the events since the state first locked down in March last year. Perhaps it’s time for a woman to clean up the mess. Remember Credlin hails from Victoria, born in the small country town of Wycheproof, and having proved herself to be a fierce and lethal weapon in interrogating the Premier’s culpability for the deaths of hundreds of Victorians since Covid chaos began, her army of sane supporters is proving to be just as fierce as the far-left Dan cult who are nothing more than blind bullies. spectator.com.au/2021/02/peta-for-premier/

She would have my vote.