By now many of you will have heard of the appalling issue of National Geographic due to be released soon. It features a trans 9-year-old on the cover, and the entire issue is devoted to singing the praises of the radical gender bender revolution. For those not in the know, one site discusses it this way:

To the sound of thunderous praise from the Left, National Geographic has decided to bring in the New Year by celebrating a nine-year-old boy’s sexual confusion. The magazine’s special “Gender Revolution” issue features a cover photo of Avery Jackson, a biologically male elementary student, as seen below. “The best thing about being a girl is, now I don’t have to pretend to be a boy,” reads the caption, a quote from the fourth grader.
“The ‘Gender Revolution’ issue, which hits newsstands nationwide on Dec. 27, examines the ‘cultural, social, biological and personal’ aspects of gender identity, according to a press release. Features include ‘Dangerous Lives of Girls,’ which follows the lives of young women in Sierra Leone, and ‘Rethinking Gender,’ which examines how science can help ‘navigate the shifting landscape of gender identity,'” notes The Huffington Post.
National Geographic’s Editor-in-Chief Susan Goldberg boasted of the issue via Twitter, calling it “historic.”
“We just published our historic special issue of [National Geographic] on the #GenderRevolution,” bragged Goldberg.

Thankfully many have already come out and called this for what it is: child abuse. Commentator Matt Walsh for example said this about it: 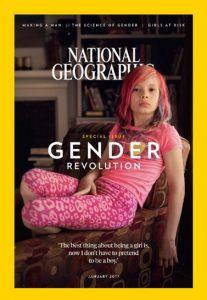 National Geographic has “made history,” we’re told, by featuring an image of a confused young boy dressed up like a girl. “The best thing about being a girl is now I don’t have to pretend to be a boy,” the boy is quoted as saying right on the cover. If this is “historic” at all, it’s only historic because it’s the first time a major American magazine has so openly advertised and promoted the sexual abuse of children.
In a more sane world, the parents of this kid and the people in charge of the magazine would be facing criminal charges for the abuse and exploitation of a child. But in the real world, a world where sanity is nearing extinction, millions will buy this issue and shout “Amen!” as this poor boy’s psychological and emotional trauma is paraded in front of them triumphantly.
What a funny thing. It turns out, after all, that a child will grow up to be deluded and confused about his gender if his sick, disturbed parents go out of their way to encourage and foment such delusion. And if his parents decide, as these parents have decided, to turn him into a public mascot for the LGBT agenda, he will become all the more lost and bewildered. Huh. Who could have possibly predicted such a thing?
I’m so sick to death of this “transgender” insanity. This is not just an academic issue. It isn’t some abstract, theoretical debate. This is something that is actively, seriously, profoundly injuring many children. The “transgender” myth is more than a myth. It is a vehicle for the abuse and degradation of children. And for that reason I make absolutely no effort to soften my words when I denounce it. Child sexual abuse is pure evil. And it deserves to be called evil. And dressing a young boy up in skirts and dresses and telling him he’s really a girl inside is sexual abuse, without question. So it is evil. Pure evil.
May God have mercy on the people who hurt children in order to further their ideological agenda. And may we one day live in a rational and decent country where such people are put in prison where they belong.

Or as Michael Brown asks, “Is National Geographic now complicit in this ‘child abuse’ by making a confused young child an international celebrity? That is between National Geographic and God, although the magazine’s readers will come to their own conclusions. I can only rue their celebration of the “gender revolution” and pray for God’s best for Avery.”

I have written plenty on the issue of the gender bender war on everything: biology, reality, science and our children. I have cited plenty of experts along the way. Let me here finish with some words from a very important piece which has just appeared by John Whitehall.

He is Professor of Paediatrics at Western Sydney University, and his article, “Gender Dysphoria and Surgical Abuse” deserves to be read and shared widely. Let me quote from it here. He begins:

In recent years, the issue of transgender identity in children has leapt from the periphery of public consciousness to centre stage of a cultural drama played out in the media, courts, schools, hospitals, families, and in the minds and bodies of children. It is a kind of utopian religion with committed believers.
The drama is “gender dysphoria” and it is about children believing they belong to the opposite sex. It is about parental anguish and commitment, court battles to instigate some therapies, laws to prevent others, cross-dressing, drugs that will block puberty, others that will transform an adolescent towards the opposite sex, pending feats of surgery that will castrate while turning a penis into an opening like a vagina, or producing a penis from a forearm in a foray into reproduction unrivalled since the days of eugenics.

But is this massive intrusion into the minds and bodies of children necessary? What will happen if parents do nothing but “watch and wait” while their child muses on its gender? Can the child grow out of it?
The answer astonishes. While proponents argue for massive intervention, scientific studies prove that the vast majority of transgender children will grow out of it through puberty if parents do little more than gently watch and wait. Studies vary but from 70 to 97.8 per cent of gender-dysphoric male and 50 to 88 per cent of gender-dysphoric female children have been reported to “desist” prior to the onset of puberty. This likelihood of “growing out of it” is declared in no less than the current, official Diagnostic and Statistical Manual of Mental Disorders of the American Psychiatric Association (DSM-5), and is supported by a number of independent studies.

He looks at how common this condition is (it is very rare) and how common are mental problems associated with it (it is very common). The risk of self-harm and suicide is also quite common. He also looks at treatments for gender dysphoria, and looks at the legal situation in various countries. He then concludes:

Hardly any paediatricians recall any cases of gender dysphoria in almost 300 cumulative years of practice. Certainly, I have not seen one in fifty years of medicine. I accept cases must exist and consider them tragedies deserving as much compassion and medical care as the three cases of physical intersex I have encountered in my career.
What astonishes me is the lack of evidence to support massive medical intervention in the face of evidence that it is not necessary. I cannot help wonder how the intervention was approved by the various ethics committees in hospitals, health regions and universities when it took some students and me over a year to get approval for a study that merely asked mothers when they introduced solid foods to their children. Ultimately, I had to give my personal phone number to all respondents of the questionnaire lest someone suffer anxiety in the middle of the night.
It is less astonishing these days that laws should be passed to ensure compliance with activists’ wishes. My generation has read the books of George Orwell, and observed the imposition of utopian ideas. Orwell would appreciate many aspects of the phenomenon of gender dysphoria. In Nineteen Eighty-Four obedience was ensured by the watchfulness of Big Brother, whose intimidation continues.
In fifty years of medicine, I have not witnessed such reluctance to express an opinion among my colleagues. For this article, I conducted a straw poll of paediatricians whom I know. Many advised me to be very careful, to appear neutral, and not to quote them despite their strong concerns about the current “fad”, hence my reference to anonymous therapists. One warned I should be prepared for him to “deny me thrice”. When I reminded him that Peter went on to become a martyred follower of Jesus, there was no reply.

As mentioned, this lengthy article complete with 60 endnotes is well worth studying and circulating. The activists are using every means they can to promote and spread this diabolical form of child abuse. We must be just as zealous and active in fighting against it.